As the title suggests there is an art to life, and as we wandered through HerefordCathedral it becomes apparent that there is art in death. A case in point is Sir Richard Pembridge, a C14th Knight who died in 1337. By all accounts he was a splendid fellow who fought for the king at Crecy and Poitiers, and was rewarded for his trouble by being made a Knight of the Garter. Better still he was allowed to wear a garter on his left leg. What’s not to like about that? 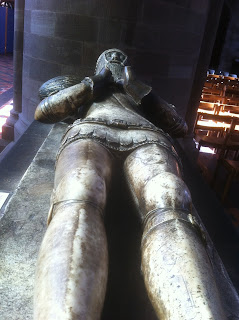 Sir Richard survived a dangerous and exciting life. He was less lucky in death, or at least his tomb was. During the Civil War in the C17th his right leg was damaged. After the war it was replaced with a nicely carved wooden leg - complete with garter. Not only was it on the wrong leg, he now had two of them. This anomaly remained for another two hundred years until, in the C19th a third leg was commissioned in alabaster and without the surplus garter. May he now rest in peace. 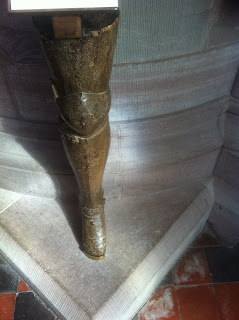 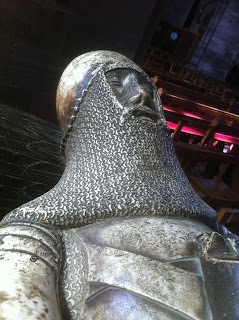 It was with that thought I stroked his head. It is one of my many vices, stroking the heads of dead men, so long as they’re smooth and cold and made of stone. I’ve stroked Einstein’s knee in Washington, and a whole series of Rodins in the Vatican Museum. No sculpture is safe from my wandering hand. Stained glass windows on the other hand…they’re too high to reach 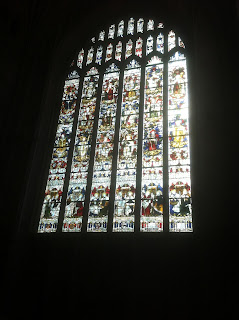 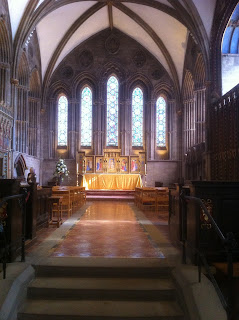 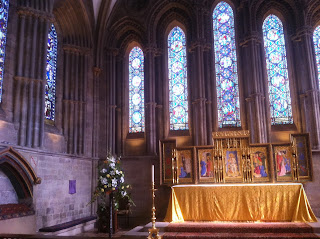 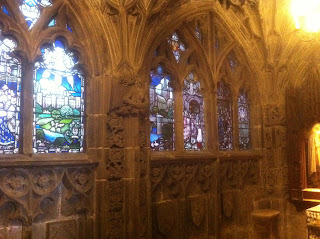 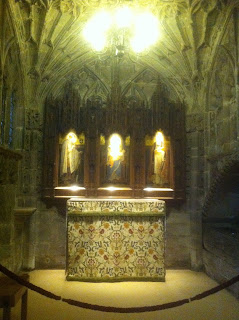 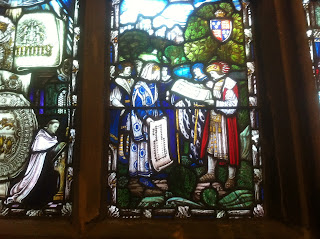 And back to tombs again. 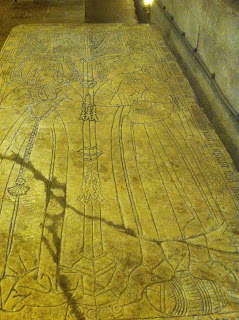 This is the tomb of Andrew Jones and his wife. He was a wealthy cider maker who died in 1497. He gave money to the Cathedral so merited a tomb... in the crypt. What I love about his is what he is resting his feet upon. Whereas knights like Sir Richard Pembridge rest their feet on hunting dogs or leopards etc, his feet rest upon a cider barrel. An early but tangible sign of the emergent bourgeoise. All in all a happy tomb, insofar as tombs can be happy.

On the other hand 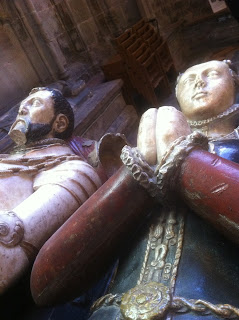 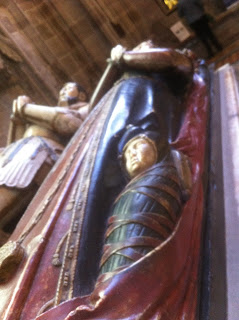 The Denton Tomb is sad on different levels. It shows the effigies of Alexander Denton and his first wife Ann Willison, who died in childbirth. (1556) The child is shown with her, tucked alongside her left leg. Alexander however died twenty years later and is buried in Buckinghamshire along with his second wife.

And let's end on a happy note. We had a hot goat's cheese salad in a small cafe adjacent to the cathedral. I don't have a photo of the salad, or the cafe, though if faced a C17th coaching inn.  I do though have some more stained glass windows - modern ones but just as  beautiful:
The Thomas Traherne Windows 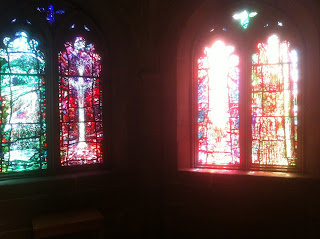 enjoyed the photos. (keep your hands off history...so rude(wink))

I wouldn't mind having a few idle moments like that.

We'll need to borrow you as tour guide when we make it to the UK.

Mac, history's no fun unless you can touch it :) but I'm glad you enjoyed the photos

Looking forward to it, Maria. Ref you and idleness, I don't think the two words go together.