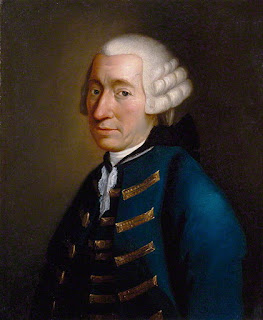 In this age of fear of giving offence Tobias Smollett should be compulsory reading, in particular his letters making up ‘Travels through France and Italy’. This man was a curmudgeon with a capital C, a man who makes Basil Fawlty a model of reason and sanity in comparison, a man who in 1763 embarked on a tour of France and Italy with his wife and manservant. The journey gets of to a bad start even before he leaves England:
‘I need not tell you this is the worst road in England…The chambers are in general cold and comfortless, the beds paltry, the cooking execrable, the wine poison…the publicans insolent and bills extortion…Dover is a den of thieves.’

He’s in for a treat in France.

But first he has to get there, and he’s not very impressed by the boat:
'The cabin was so small that a dog could hardly turn in it, and the beds put me in mind of the holes described in some catacombs.'

French inns are worse, and Smollett doesn’t mince his words: (here) 'one finds nothing but dirt and imposition.' One of his hosts is ‘a true Frenchman in vanity, which is undoubtedly the ruling passion of this people.' He extolls the virtues of French food, with the exception of fish because by the time it has been transported inland is in ‘such mortified condition, that no other people except the Negroes on the coast of Guinea would feed upon it.’ At first I assumed this was an example of ignorant and misplaced certainty. And I was wrong. Smollett was a well-travelled man and there are some wonderful tidbits on the eating habits of various peoples throughout the book.

His bad tempered analysis of France is laughably unpleasant. It’s also sharp and makes clear why, twenty or so years later,there was a French revolution.
If French peasants are filthy and villainous. The French nobility fare no better:
‘I know not more insignificant set of mortals than the noblesse of Boulogne; helpless in themselves and useless to the community.’
This is the wonderful thing about Smollet, his scattergun offence approach. Every race and culture gets it in the neck—even as an aside:
'If there is no cleanliness among these people, much less shall we find delicacy…Indeed they are utter strangers to what we call common decency; and I could give you some high-flavoured instances, at which even a native of Edinburgh would stop his nose.' I’m guessing he’s talking about toilet habits here—and my apologies to Edinburgh.

Smollett’s indignation knows no bounds when he describes a fine lady escorted to  the ‘house of office’ by her admirer, who stands outside the door uttering pleasantries to her while she conducts her business.

As Christopher Hibbert observed: ‘Always prepared for the worst, Smollett generally succeeded in finding it.’ Perhaps that accounts for his habit of demanding the bill with his sword in one hand and his cane in another. He hates innkeepers French ones especially. Their food was ‘obnoxious’ and landlords are variously described as assassins, waiters as ‘stark staring mad.’

This is a wonderfully intemperate book and I’m still only halfway through France. Italy, in Smollett’s view is even worse. I can’t wait. I hope I’ve whetted your appetite. You enter a very special mind when you read Travels through France and Italy, and glimpse xenophobia in full and glorious flood. Smollett is in turn observant, wilful, insensitive and opinionative; above all, robust.  A Briton voicing his thoughts without looking over his shoulder. Even so, one wonders throughout what his wife thought.
Posted by Mike Keyton at 06:49

Hi Mike,
First of all, I want to congratulate you on your novel! That's excellent!
As you may have noticed, I haven't been blogging much; therefore, I was not aware of your published book.
Is it an e-book?
Wishing you much success on your novel!

Thank you Claudia. It's good to hear from you again.. I'll send you a link to my Amazon 'author page' :)

Ha! I've already got an opinionated husband, I don't need to read about another one. His poor wife!

A husband without opinions doesn't bear thinking about