Are damson trees sentient? Are some wilful? Can some turn rogue? From a tree that appeared to be on its last legs, a branch emerged. We thought nothing of it. And then it charged. In slow motion, admittedly, but its charge and purpose is unmistakable. Like the medieval warhorse and knight, its lance is aimed four square on our conservatory. 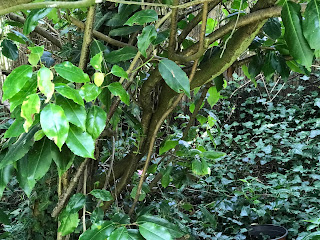 I read somewhere trees are social and cooperative, their roots transmitting aid and succour to other trees, their canopies sharing light with fellow trees. Not this bugger. Beneath its headlong rush is an ornamental tree, which has been all but swallowed up. 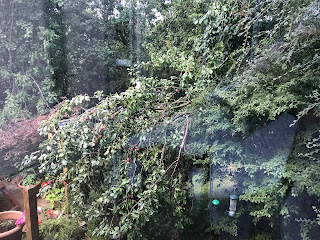 Somewhere underneath the shaggy dragon is an ornamental tree. 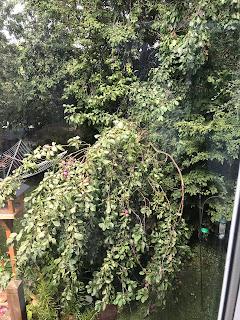 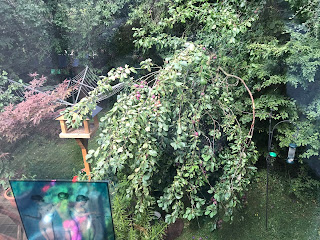 When the wind blows, this rogue branch laden with damsons nods sagely like some knowing dragon. It whispers strange thoughts into my head. I’m saving you having to cut the grass, Michael. And look at the fruit that I bear. Unarguable. It is laden with fruit, and you can’t get past it without stooping, like a small Quasimodo—something impossible dragging a lawnmower. It is also, as my wife reasonably points out, preventing her from reaching the washing line. 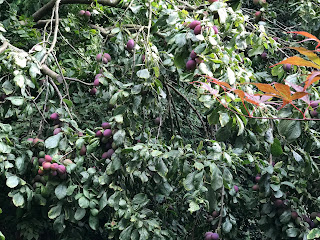 As you can see, laden with fruit 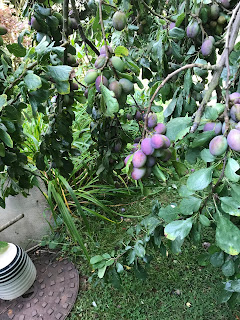 Can you see our access into the garden
Look closer! 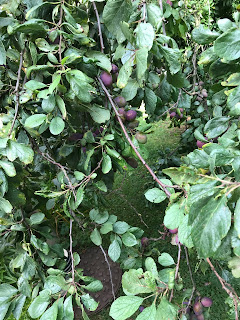 There it is, that tiny green gap for washing and lawnmowers. 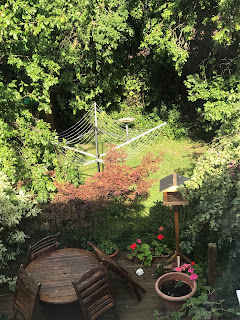 Looking at it from above, you can see how my damson forest has shrunk our garden into little more than a glade. Personally I like it. It has mystery. At night, I imagine hedgehogs and fairies outrageously flirting. In the meantime there is washing to dry via a goblin tunnel 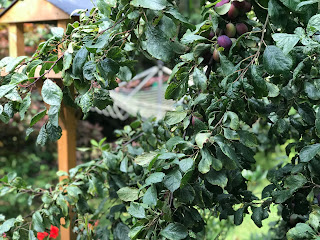 And birds to feed if we can but reach the bird table.

We have arrived at an uneasy understanding whispered only at night.  As soon as the damsons are picked – in a few days – the branch will be sawn to a stump. The branch is not aware of this fact. I think. If there is no blog next week—you will likely know why

I can grow figs and I can grow citrus, but other fruit trees elude me.

I am jealous of your riches.

Bernadette said you are welcome to our damsons in exchange for your figs. We have one fig tree doing quite well in a pot (it was a present for Frances) but the sum total of our harvest over 8 years has been 4 miserable figs!