Lockdown: thoughts in a garden with plenty of wine. 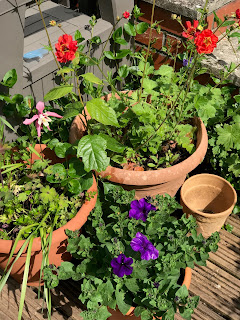 It’s been an interesting few weeks, a kind of time-warp taking us back to the fifties – deserted country roads, near empty pavements and roads without traffic. And, shades of 1984, one or two simple messages stamped upon the collective mind: ‘Save our NHS’—‘stay safe,’ — ‘self-isolate. The slogans, along with the manufactured compulsion to clap and bang pots each Thursday night in support of care-workers and nurses, though laudable verge, on the totalitarian with its ‘nudge’ factor compulsion.

Few would deny that support and appreciation of those fighting to save lives is entirely good. Less good is the smokescreen it offers for the top-heavy bureaucratic behemoth of the National Health and Public Health England. Ministers have become the fall guys for their administrative shortcomings, and that would be true whatever government was in power.

But on to smaller things. It’s been fascinating to see the shy ‘were-all-in-it-together’ smiles as you side-step strangers on pavements or lanes, a new and delicate social quadrille—and you wonder what the new ‘normal’ will be when it’s all over.

On the one hand, I’m so looking forward to seeing friends again, dinner parties, doing what what we once took for granted: the impromptu latte in Café Nero, the occasional cheeky beer or two on a hot day in a country pub. Or a town pub. Or any pub. Restaurants.

Part of me looks forward to diving back in and altruistically (yeah, sure) buying even more beer and eating more curries, Italian, Chinese, breathing life into ailing businesses. Resuscitation or greed, who cares?

The reality may be different. Another part of me is cautious, even nervous of plunging back into society—too quickly at least—and I wonder how common this factor may yet prove to be.
It’s a bit like those misnamed ‘free range eggs,’ so called because the chickens, though cooped in large barns have one or two small access points; in theory they can free range but few if any do.

How many of us will have grown used to our ‘barns’ – not those poor buggers cooped up in small flats with two or more children—but enough to make economic recovery even slower?

Keeping with the economics for a moment, an unexpected flip side is the money we’ve saved with less things to spend it on. The downside is how quickly it will be taken from us in taxes, as governments attempt to claw back the money they’ve spent. It will be a fine economic and political line between carrying on the debt indefinitely and clawing all or part of the money spent at the risk of  indefinite recession.
Posted by Mike Keyton at 04:52

So is your area in enforced lock down? They're starting to loosen quarantine in our area. Some states are clinging to isolation. I'm not sure if it's political or if their virus numbers really are up. It's hard to get the truth from the media. Everyone has an agenda.

We went out today. About half and half in masks. But all employees at stores were masked.

We're cautious, but unafraid. We wear masks, never walk in the house with the shoes we wore out in the stores, and we wash our hands so often I'm anticipating webbing between my fingers.

Some restaurants are opening, but I think we'll stick to take out for now.

Still in lockdown, Maria but with the complications of political gaming on the part of the devolved administrations of Scotland and Wales - so anything the UK government says, they will make a point of doing something slightly different. So Wales is on slightly stricter lockdown than England.
What irritates me a little is the secrecy/whispers business. IE the virus has hit Monmouth and there have been deaths, but no actual details can be gleaned so you have the choice to avoid certain areas. Instead we have the raw figures for the entire county of Monmouthshire are given - which is neither much good for man or beast.