"Every record has been destroyed or falsified, every book rewritten, every picture has been repainted, every statue and street building has been renamed, every date has been altered. And the process is continuing day by day and minute by minute. History has stopped. Nothing exists except an endless present in which the Party is always right" George Orwell. 1984

The study of history has much to offer. One of the best things about it is that it allows you to smell bullshit from some distance away. What happened to George Floyd was abhorrent and seen to be so by most of the world, but in subsequent events, the man himself has disappeared to be replaced by a symbol. 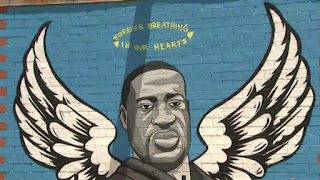 Some, with ulterior motives, will highlight George Floyd's criminal background, in one case, forcing his way into a house and pressing a gun against the stomach of a pregnant woman. He served five years for that. But people mature and redemption is everything. I like to think he was turning his life around until it was brutally cut short. But the point remains, he was flawed. It is the nature of humanity. But now, akin Christ’s Ascension into Heaven, George Floyd has become a symbol.

And symbols are dangerous as the fates of memorials and statues testify.

The most important thing a historian learns is that people in the past cannot be classified as ‘bad’ based upon our standards otherwise the whole discipline becomes worthless. People in the past were simply different and acted according to the mores of their time.

In an age of religion, Islam following the example of the prophet and slave owner, Mohammed, killed and conquered in the name of Allah. The First Crusade took place because ‘God willed it,’ and the streets of Jerusalem were awash in blood as a result.

Hawkins, Drake and Edward Colston had their virtues and faults but none of them deviated from the mores of their time. Slavery was a given and practised throughout Africa and the Arab world as well as the newly colonised America.

Cecil Rhodes similarly embodied the culture of his time. Victorian England believed the Empire to be a force for good, a divinely inspired mission to civilise the barbarous. Rhodes is now a convenient symbol, easier to attack than the subtleties of an entire heritage but at the expense of understanding both the man and his world.

The majority of the pilots and soldiers we now laud as World War II heroes would be seen as 'racist' by our standards.  Churchill though, is the more convenient symbol, but 'convenience' isn't necessarily 'meaningful.'

Understanding is everything. When, in a different life, I taught history, a favourite topic was ‘The Hundred Years war partly because it involved ‘bashing the French’ in victories such Crecy, Poitiers and Agincourt: Tactics, longbows Vs heavily armoured knights, schoolboy stuff. But then you went on to examine the massacres, the brutality of the English – how The Black Prince dealt with Limoges where three thousand men, women and children were massacred. Here the narrative becomes complex, discussions ensue, judgements made. But then, even in those pre-google days, the Hundred Years War was quietly erased from the syllabus and with it a colourful episode in our history along with its moral complexity.

Moral relativism has been for a long time fashionable. Is the pendulum now turning back to a world of ‘absolute truths’ ? For example, Islamic fundamentalists destroying Buddhist statues, or the ancient artefacts of Palmyra were roundly condemned even though, according to the logic of relativism, their abhorrence of pagan works is just as valid as our present abhorrence of slavery. Are we now turning our backs upon such relativism? Are we now, like the Victorians, proclaiming one ‘truth’ is more important than another? It’s alright for us to destroy statues but not those  fundamentalists.

Absolute truths did for Galileo, along with millions in Russia, China and Cambodia. Books have been burned—Beatle albums, too, in Georgia and Alabama. And long, long ago iconoclasts did a grand job in old Byzantium.

In this highly charged time, statues have become not only become symbols for those who would make capital, but also convenient distractions. It may be that the symbol George Floyd becomes a battering ram to capture the White House for Joe Biden. Alternatively, the symbol George Floyd may be the means by which Donald Trump actually gains a second term. Whether it be American politics, or a statue thrown into river, men become symbols and symbols become playthings or means to an end. And they may yet release darker forces.

If I knew how to fix this era of misinformation, I would. It's not enough to research and give evidence to people on whether something is the truth or not. It's mob mentality over reason. Or as was said on Babylon 5, "good facts" over true facts.

I weep for future generations, fed on societal pablum and bred as gullible sheep.

Of course statues are a distraction. But all thinking uses symbols and the important effort is to enable people to understand that they can be toppled and encourage them to get beyond the concrete into the area of true play (as Winnicott would show us).

We are sleepwalking into somewhere I don’t want to go, Maria

Hi Unknown, your comment illustrates admirably how symbols then become playthings to use or abuse