Little did I know that, in 1964, I was to become no. 21722 in a fragment of cultural history. Another snotty nosed adolescent had joined the revolution: The Radio Caroline club. This was a time when music was confined to the BBC with shows like 'Music While you Work'  ‘The Billy Cotton Bandshow'  and ‘Two Way Family Favourites.' Rock music could be heard on tinny Radio Luxembourg, but they were essentially a payola operation, playing 'paid for music' by the likes of EMI, Decca, and Pye.

And then Radio Caroline came along. In its original form it lasted a mere three years but its influence was profound

In the recent film, ‘The Boat that Rocked’ some of the spirit of pirate radio was captured. In the process, history was falsified. The film falls into the anti-Tory trope, ie the stuffy Conservatives were responsible for closing down pirate radio, whereas in fact the opposite was true.

The Marine Broadcasting Offences Act became law in August 1967 and was introduced by Harold Wilson’s Labour Government. Its architect was the Postmaster General, one Anthony Wedgewood Benn. Tony Benn as he later preferred to be known. That very archaic title gives the game away. In those halcyon days, British Broadcasting was controlled by the GPO, the General Post Office, which had granted exclusive radio and Television broadcasting licenses to the BBC, and later, through gritted teeth, television licenses to 16 regional independent TV stations. It was in effect a state controlled closed shop.

Then pirate radio came along, broadcasting from unseaworthy shops from outside British territorial waters and Harold Wilson personally authorised the use of the most powerful transmitter in Europe – a one megawatt facility reserved for a national emergency – to jam Radio Caroline’s signal.

Why did Wilson use this sledgehammer to crack a nut? There were rumours that some pirate radio stations were intent on exposing his affair with his secretary, Marcia Falkender. Certainly, and now with good cause, pirate radio was instrumental in Wilson’s surprise 1970 election defeat.

But there also other factors in play. Government action had European links even then. The 1967 Marine Broadcasting Act represented the UK’s ratification of the 1965 ‘European Agreement for the Prevention of Broadcasts Transmitted from Stations outside National Territories.’ A bit of a mouthful and for obvious reasons known or disguised as ‘The Strasbourg Treaty.

Despite every effort to disrupt and destroy pirate radio, Caroline persisted in one form or other, its low point being 1980 when a storm sank the unseaworthy Mi Amigo. The DJs and their pet budgie, Wilson (named after the British PM) were evacuated. The ship sank leaving only the mast visible above the waves – and the memory fifty years later—along with my Radio Caroline membership package.

A little bit of history (but more in depth here) 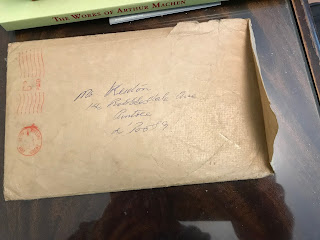 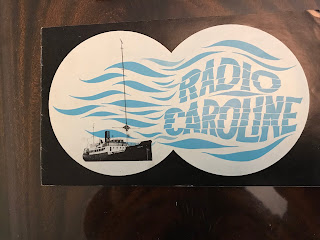 And it it a small glossy booklet. 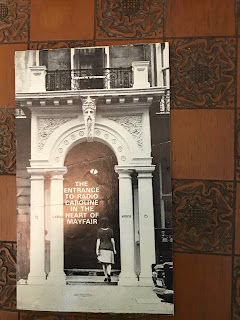 I immediately look at the back to see this, along with the legend 'From the centre of Mayfair'. Such sophistication. And the girl. The snotty-nosed adolescent knows he is part of something big 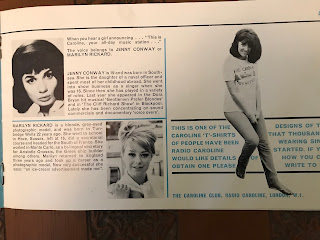 And if there was any doubt, there is this! 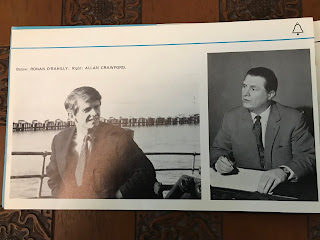 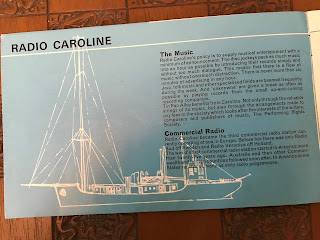 The booklet is a mine of information - history and DJ's one of whom was a friend of 'the popular Jimmy Savile' Ah, innocent days. 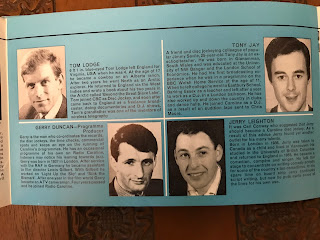 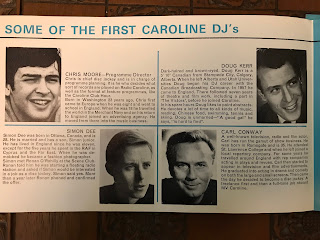 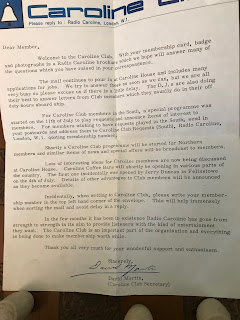 In these digital days of word processors and photocopiers, this seems from a different age - which of course it is. 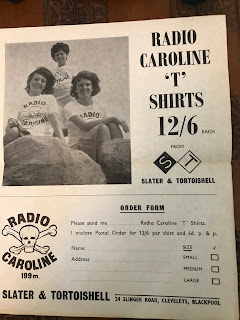 As is this: The Radio Caroline T shirt. I also got three signed photographs of Radio Caroline's hottest D Js. Well, they no doubt thought they were 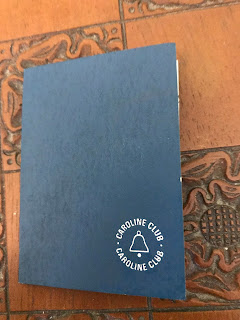 And my Radio Caroline club membership card with the knowledge that 21721 other people had been similarly seduced.  I was now an official member of the 'Swinging Sixties.' 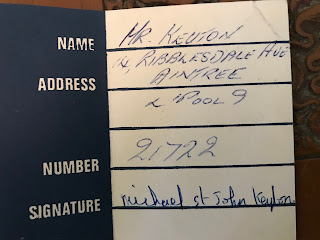