The moon was once as smooth as a snooker ball until the Scottish midge arrived and set to work.

1976 was one of the great British summers. It is still talked about today, like Biblical Jews might have talked about the parting of the Red Sea many years after the event.

We were on the Isle of Skye at the very peak of the heat-wave and took it upon ourselves to climb what looked an accessible mountain. It may have been the Quiraing, I'm not too sure.

Several times we thought we’d reached the top, only to discover that it was merely a ridge and, invisible from the ground, lurked another elevation, followed in turn by another.

As we climbed we longingly looked below at these tiny locheens. They shone clear and blue, like turquoise chips scattered amidst the dry yellow grass. On the fourth ridge, we gave up and all but ran down, skidding on scree in great clouds of dust. 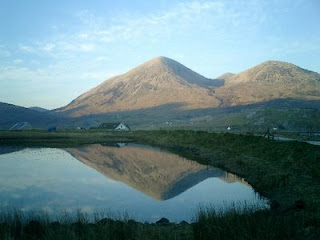 We stopped at the first locheen, looking as blue up close as it had from a distance. The midges looked less blue – a swarm of agitated specks homing in on us fast. We ripped off our clothes – not fast enough – and plunged into ice cold water until only our nose and eyeball showed above water.

It was one of the great experiences, along with that peculiar smugness that evolution and a superior brain had enabled us to outwit the midge. They hummed above the surface as we cooled down in crystal water, our flesh for the moment impregnable. Disgruntled midges, we sneered at them.

I realized something was wrong when my legs turned blue. Then I realized I couldn’t feel them, and that my teeth were chattering like small castanets. The midges were gloating, their victory dance an aerial jeer.

I lumbered out from the water, aware that brain size wasn’t everything, that evolution had flaws and that a thousand midges were diving towards me. Disgruntled midges are not to be trifled with, a thousand of them... Drying was a luxury we didn’t have time for. We were under attack. But dragging clothes over dripping wet bodies was no short cut. Fabric stuck to flesh like backing tape, normally docile clothing just point-blank refusing to cooperate. They had turned into a fifth column, the enemy within (or without) colluding with the midge until our snooker smooth bodies were cratered more deeply than the moon.
The midges of Scotland did for the Romans, and I understood why.
Posted by Mike Keyton at 07:48