A Davy Crocket Hat at last!

I spent the Christmas season in a different world: a frontier world, intensely hospitable, easy going, and one of clear and definite views. On Christmas Eve I was given a present of rattlesnake skin and we went to Ivars Fish restaurant overlooking Seattle Bay. Then, just make sure I had eaten enough they took me to ‘Ye Old Curiosity Shop where I was confronted by someone who hadn’t eaten so well. We had dinner at Rick’s parents – Chuck and Edith – who like everyone I met – were warm and generous and very fine cooks. That night we wrapped up presents. 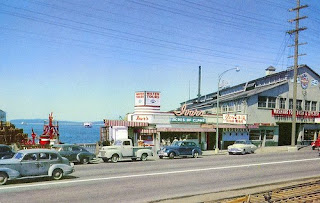 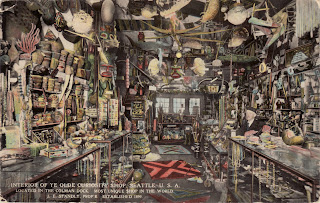 One of its inhabitants: a mummy. 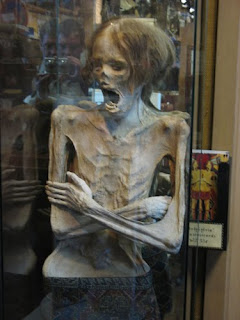 The present ceremony was beautiful and the presents I was given lasted (as my wife will testify) many, many years. Kathy’s mum gave me a ‘Hunters’ shirt which I wore for almost two decades (in between washes) And Kathy gave me my ultimate dream. Some people dream of Harley Davidsons, others of joining the Mile High Club. All I ever wanted was a Davy Crocket hat.

Rick had originally gone hunting raccoon but as the time grew nearer to my visit, they were forced to buy a dead raccoon, and from its skin Kathy manufactured the ultimate Davy Crocket hat. It’s now staring balefully at me from across the room. Sometimes I wear it l – when I’m alone and no one’s there to laugh or object. I remember that period in Liverpool when Davy Crocket ruled supreme and not a cat was safe from catapult or the well thrown stone – though no one to my knowledge ever succeeded in making a Tabby skin hat.

After Christmas dinner the ‘men’ played cards in the cellar and told stories of ‘Bigfoot’, and I won 31 cents. Upstairs the women talked, washed up and ate.

I still remember Rick’s story of his ‘encounter’ with Bigfoot, and to this day am happy to believe it’s true rather than the tall tale told to a lime-sucking greenhorn. Greenhorn. Still haven’t figured out where that particular word comes from. Google would tell me but some things are better to wonder at.

The nub of the story was that Rick was hunting in the Cascades when the forest grew silent. As he walked on he became aware of a stench so foul he wanted to throw up. Then came a cry neither animal nor human, a sound he had never heard before. He sensed a presence but saw nothing, and slowly retraced his steps.

A great story after a few beers.

I went to bed thinking of Bigfoot and Davy Crocket and wondering who would come out on top.
Posted by Mike Keyton at 05:05

Now I know what to buy you the next time I'm souvenir hunting.

Hmm now that I have a raccoon skin hat, I take it your talking about getting me a Harley Davidson :)

Oh, hell, scrub that. That mean old fortune teller told me a motor bike would one day be the death of me - I could always have two raccoon skin hats, one for best :)

You must drop a hint what you'd like from wales. A sheep perhaps.

Yes, no motorbike for you. I already have one man I worry about with that.

Ref: Sheep
Just what I need for the farm. LOL.

But they'd be hard to mail. Think of the export fees!

I'll have to settle for your plum wine if we ever make it over there.

As I said, wine is good. I hope you two make it some day

I can see Bigfoot wearing a Davy Crockett hat (a literal one!)

Ah, but did BigFoot kill a bear when 'he was only three'?

Was Davy Crocket ever big in Sweden, Malin. Come to that, does Scandinavia have anything equivalent to Bigfoot?