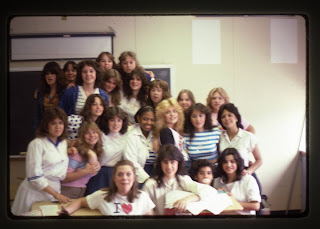 A poor picture, which doesn't do these characters justice. There are more of other classes, when I sort out the slides.


June was a month of gifts and good-byes. Joan Marus a shy, gruff woman with one hell of a smile presented me with a large Western Anthology which I still have and still dig into, and when I do I think of her, and how she made my life so easy in her role as Head of Resources.

Harry Cisler He even made the New York Times. Scroll down a paragraph or two.


Harry Cisler taught English, an aesthete and hedonist, he always put me in mind of a merry monk. His gift, a biography of Thomas Merton, I regret to say I didn’t enjoy. It reinforced my feeling that I perhaps lacked spiritual depth. Whilst reading it I just thought ‘No….No…. Why are you doing this?’ – referring to Merton, not me reading the book. The life described chilled me. Harry promised me we’d one day meet up again. Maybe I’ll be able to return the favour with a biography of Gordon Brown.

There were emotional send-offs from classes CD, KL and IJ, an 'I love New York' mug and T shirt from Lidia Furcik and Suzanne Collins,* hugs from Kris Osbora, Liz Kirk, Laura McGregor and Joan White…and then I stopped counting.

I had my last American hair-cut in a dusty subway booth; dry cleaned some trousers, along with Ron and Annette’s couch covers, and thanked Bob and Tom when they agreed to water the plants during the time I’d be away.

It’s interesting, listing the ‘tedious’ because, in some way, it captures how slowly time goes when you’re waiting for the next big adventure to begin. I remember supervising the last exam of term – chemistry – with Mary Mack. I was in room 202 and looked out the window for what I knew would be the last time. Directly opposite were clapboard houses and white picket fences that could have come from the pages of Tom Sawyer.

So much had happened: St Agnes end-of-term parties, where glasses were colour coded (red for alcohol, blue for soft drinks) so what the Sisters were drinking could be seen at a glance. It was not a fool-proof system as Sister Peggy Linane’s raucous laughter testified. Graduation Day, too, knocked me out in so many ways. First of all the condensed pageantry of it all: flags and gowns and mortar boards – and over in under 55 minutes. And the attention to detail, even so far as to finding out which Welsh university I went to, and acquiring the right academic gown.

In the course of those 55 minutes I discovered why ‘academics’ on these occasions, walk in such a grave and stately manner. It’s the mortar boards. They’re not secure; no grip; the slightest nod sees them sliding down your face. I walked like Eliza Doolittle.

I said goodbye to Ron’s parents and they took me out on their boat on Great South Bay, drank for the last time in Pub 74 and saw ‘Feud’ and ‘Haywire’( where are those bands now?) The days were creeping by…Ron’s bathroom cleaned…then the apartment…then the bank and my 2000 dollars spending money – boosted by a five dollar gift (a drink on her) from Sister Vera and an eighty dollar gift from Sister Kathleen.
And then it was over.

In the taxi taking me to the Aventours coach I passed familiar streets. I thought of John Scanlon, his disappointment that I didn’t find the mustard in McSorley’s Old Ale House particularly hot, his track coaching with Kathy Godish and talented runners like Maureen Murphy…In fact we passed the street where I saw him heaving and white, having just finished a New York Marathon. That was weird, all of them draped in tin-foil looking like exotic insects, barely able to stand…Even on my way to somewhere else, my mind wouldn’t let go. I was leaving New York and hating it. 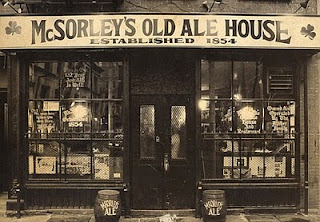 The oldest pub in New York (1854) serving really nice beer. John told me Abraham Lincoln had a drink here. Shame he didn't drink there more often instead of going to a theatre


* I stil haven't out if it's the same Suzanne Collins the present, best-selling YA author.
Posted by Mike Keyton at 06:27

Ref: * I stil haven't out if it's the same Suzanne Collins the present, best-selling YA author.

That would be a kick in the head, wouldn't it? You should write her and ask.

It would be so cool if she was the same person. Small world.