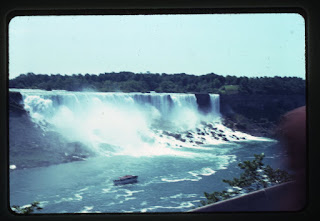 We had set up camp on the U.S side of the ‘Falls’, and established the procedure that would operate throughout the entire trip. We divided into rotating groups: ‘F troop’ packed and unpacked the bus, and set up the tents. A, B, C, washed the bus, helped in the cooking and washed up. D troop rested. Sue, a plump and jolly lady, having completed her training as an Aventour cook left us at Niagara and was replaced by Barbara, a lean and attractive woman with a huge smile.

Breakfast in the open air. Brilliant. Then into Canada. Passing through the American-Canadian customs, reminded me of an episode of Frasier – the one where they’re crossing the border in Martin’s camper-van and smuggling Daphne back as an ‘American’. We had two irregular visas: Veronique a cheery Dutch girl and Doritaa, a more intense Israeli.

We stopped, and took our pictures and then looked down into the cataract below. I saw a tiny boat bobbing dangerously close to the falls, several times vanishing in spray. It was the Maid of the Mist, and later that morning we were on it. 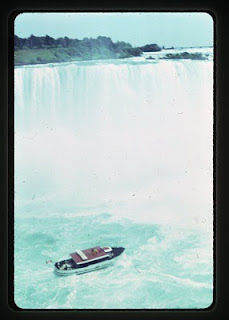 Kitted out in water-proof rubbers and hoods, we looked like a weird bunch of S+M monks. After a thoroughly good soaking we went back to camp and consumed huge amounts of ‘grog’ 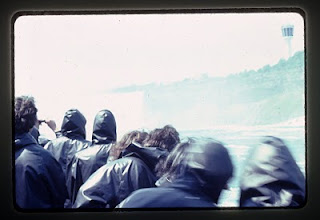 Huge amounts of grog: Irresponsible perhaps, but necessary. That afternoon we walked around Niagara.

God or, if you wish, the last ice age gave us Niagara. Man, small, entrepreneurial and tacky added what God lacked the foresight to provide.

There were seven waxworks ‘venues’ in one small street alone. One boasted the ‘World’s Largest Lady’ but that was trumped by a Biblical Waxworks which advertised ‘The World’s Largest Crucifixion’. What’s with Niagara and waxworks? Why would anyone go there to see a…waxwork? 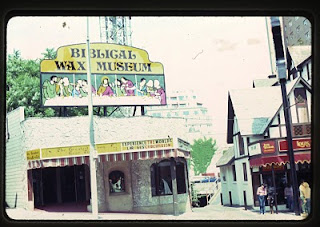 We spent the evening in a local Honky-tonk bar. The band was really bad. I like heavy metal. I like Rock to be loud. But this band had spent too long in the waxworks.

We stood in a gloomy space deafened by the banal and I became more and more bad tempered. God, I’m sad when I’m bad tempered.

Eventually we moved on and found a Holiday Inn Disco –much to the delight of a bored DJ playing music to an empty floor. Unexpectedly he now had a crowd – and inveigled the Dutch, the French and later the Germans in a series increasingly bizarre dance routines. They needed little persuading.

I joined them but have little recollection of what happened next.
Posted by Mike Keyton at 08:26

Your stories are so much fun!

We wore the same stylish rubber suits, probably 10 years before you got there. We went to Niagara Falls in 1975 for our honeymoon.

We didn't take the boat ride though. I was already as close to the water as I wanted to be.

And we didn't see the waxworks. It was our honeymoon, after all. :)

You wore the rubber suits.

You didn't go on the boat.

Thanks for the nice compliment, Maria.