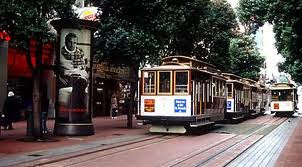 Some days later I was attempting ‘House of the Rising Sun’ on a mouth-organ, bought in San Francisco. It had been driving the coach mad, and I’d been relegated to a palm tree in Santa Barbara to practice one final time.

It had started off so innocently on our second day in San Francisco. Veronique, Marjian, Roland and myself had just finished breakfast at a neighbouring diner. There were things to do that day, not many but enough to fill a hot blue morning. I had to locate a tax office to sort out my departure papers. Roland accompanied me because he had the vague idea he wanted to buy a bag, and en-route, I was suddenly struck with a burning desire to buy a mouth-organ – two mouth-organs in A and D.

I found San Francisco an easy city to navigate and we were helped by the shopkeeper who showed us a short-cut, which involved a detour down Turk Street. It was a street of beautiful houses but I was feeling more irritable than aesthetically attuned. Roland was beginning to wear me down, his tendency to take charge whenever he could. This was probably imaginary, resentment fuelled by being one of too many people cooped up on a bus for a little too long. Bonding has its downsides – which is why alcohol has its uses. 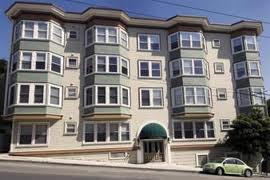 The problem here was that it was too English to be authentic. Every conceivable variant of the pastiche was crammed into its walls. Still, it sold Guinness, and the problem evaporated in an agreeable blur. 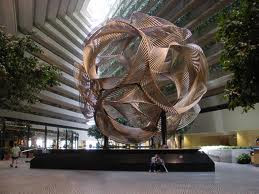 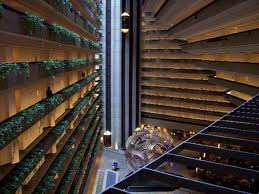 Suitably refreshed and friends once more we walked to the Hyatt Regency which looked like something from Babylon…well, after a Guinness or six. Its interior was a sensory feast and made us feel like two camel herders come straight from the desert.
The evening ended in another party in Gary’s room, one even wilder because too many of us didn’t want the party to end.

Note. No blog for short time. Computer in for repair.
Posted by Mike Keyton at 03:39

Ref: All three attitudes have their merits. Not all problems can be solved and alcohol makes the second option more bearable.

You're such a philosopher!

Is there one thing in the states that you would like to see again?

Yeah, Socrates with a pint

The Grand Canyon I would love to see again. I'd like to think I could still walk down and up in a day

And one that I didn't see - Monument Valley

Damn! Had I known, I would have taken a detour to join you. Guinness and a mouth organ? Bliss...

We could have taken turns so that the music never stopped whilst the other one drank :)

Why do I suspect I would be doing more playing than drinking?

Because you don't trust me with a mouth organ, damn you!