Yogi Bear and the Grand Canyon 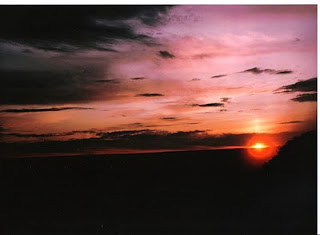 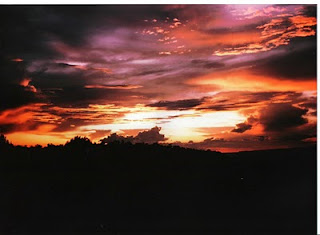 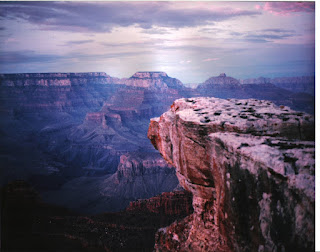 Roland and I woke at 4.30 am and staggered along the path, just in time to catch the sun rising over the canyon. Then it was back to the bus for the journey to the start of Angel Trail. We took our first steps into the canyon at 6 am.

It was deceptively easy walking down – like a gigantic and never ending sand-stone staircase, spiralling ever deeper in time. . . the old, old west, and then earlier still. The canyon, I believe, is a mile deep, but the spiralling path is something in the region of ten miles. It wasn’t exactly a broad highway to Hell, but the thought crossed my mind later in the day, when it was time to climb out the damn place.

Walking down was magical, a little like bouncing along the yellow brick road, only here we were surrounded by vibrant ochre, intense heat and silence, the vegetation a strange, bluish green.

It took just under three hours to reach the bottom, where we paddled in a very green Colorado river. The temperature was rising fast, and it wasn’t even midday. Time to get out. I remember craning my neck, looking up at a distant rim, the thread of a path winding its way up the now glowing rock.

I started off alone with a water bottle, (I realised the hard way) was far too small. Mind you, one fool in group had no water-bottle at all and was in a very bad way – re-hydrating barely in time at each of the three water-stops.

The first water stop was at Indian Gardens, five miles up. It was lakin to being trapped in a red, radio-active oven – a 100 degrees and rising. The sparse vegetation was chuckling, though I may have been hallucinating. I was dehydrating fast, sweating dropping off me in a small monsoon.

The worst thing about sweating is not the smell, but the loss of something you never really think about - minerals. I was aware of my joints seizing up, like an engine losing its lubricant.

About a mile from the top I witnessed a ‘Yogi Bear’ moment. Bear in mind, I’d never seen real ‘park rangers’ before and this one looked just like Park Ranger Smith in Yogi Bear, right down to the hat he was wearing. Only instead of Yogi Bear he was addressing a very fat woman in a bright, floral dress. She was wearing high heels and was slumped over a very large boulder.

despite some very urgent prodding from Park Ranger Smith. “You can do it, ma’am. It really isn’t far.” Every so often he looked upwards, as though the crest of the canyon might be lowered by a mustard grain of faith. She wasn’t persuaded and I left them there where they remain forever in my memory.

A little further up, two other members of our party emerged like lizards from the shade of a rock. Sharon and Dorita who, with a better sense of their capabilities than the woman in her floral dress, had walked until they felt hot, and then slept in the shade, waiting for it to cool again before beginning their ascent - little over half a mile.

Gary, our driver, and the rest of the group staggered out around 6pm. Gary was in pretty bad shape but incredibly cheerful having achieved what he wanted. As I remember, Laura, having taken the New York advice to heart, never went down.

The day began quietly. It ended with a bang. We ate dinner in a storm. 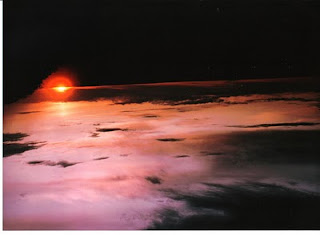 This picture is the same as the first one above but turned upside down, because I'm a simple soul, and to me it resembles an alien landscape
Posted by Mike Keyton at 04:45

I cannot imagine anyone daffy enough to make that trek without a water bottle. That's insane.

The Grand Canyon was only a stepping stone on our trip so we never made the trip down, but several of my friends have made it and their stories resembled yours in many ways.

I liked what one friend told me once. He'd never had a faith and he said the Grand Canyon became his church that day. It was the best trip of his life.

He died two years ago and I'd like to think he still visits his church from time to time.

That's a great story, Maria. I imagine the canyon is full of ghosts, some unimaginably old

Those photographs of sunrise are breathtaking, though not as much as the climb according to your description.

High heels? See? Editors sometimes complain about our far-fetched plots when reality is far more bizarre. The canyon in heels? I need refreshment to recover...

And the thing is I wasn't hallucinating then. It really happened. I bet park rangers could compile a fairly wonderful anthology

PS thanks for the compliment ref photos