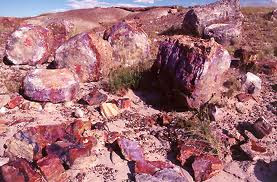 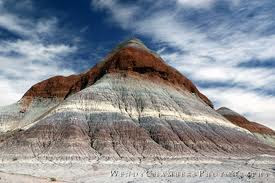 What’s worse, the dead mind or the jaded spirit? I all but found out on the 29th of July. We’d set off for Albuquerque where, enroute, we saw a petrified forest, followed by a ‘painted desert’…and I was bored.

Did Roman emperors ever reach this unhappy state? Here was I, still surfeit after the Grand Canyon, now presented with fresh wonders and no emetic to make room for them.

Given the chance I would have enjoyed camping the night there, wandering around, perhaps toying with the possibility of ‘getting lost’. Instead, other than a very short stop we drove on by, and staring out through the window, I might as well have been watching TV. Grumble over. I had no reason or excuse to be bored. A character flaw.

As we approached Albuquerque we saw a few balloons – maybe practising for the festival later in the year. Albuquerque however I can’t really remember. Serves it right for not being one hundred percent sure of who or what it is named after.

Was it named after a past provincial governor Francisco Fernandez de la Cueva who also held the title of Duke of Alburquerque – a small Spanish town? But then where did Alburquerque come from? It’s enough to drive a man mad. Some argue it is rooted in Arabic for ‘land of the cork’ - ‘Abu al-Qurq’ (but don’t let the Taliban in on the secret).

Others hold the conviction that it is based on the latin for ‘white oak’ or ‘Alba querqus’ because the wood of the cork oak is white after the bark has been stripped. These scholars flaunt the seal of the original Spanish village which is that of a white oak, framed by a shield, and topped by a crown. Conclusive you might say – Oh God yes – please say yes.

But no. Etymologists are a perverse bunch. Some go back to the blessed Arabs again, suggesting the word is derived from the Arabic for ‘plum’ ie ‘Al-Barquq’ and its derivative ‘Albaricoque’ which is Galician for Apricot. They don’t have a seal to prove it, just a nice story: The settlement of La Ciudad de Albaricoque was established near an apricot tree. Frontiersmen, unable to speak Spanish with any degree of fluency, pronounced it as Albuquerque. As I said it’s enough to drive a man mad, which is probably better than being bored.
Posted by Mike Keyton at 08:51

Ref overindulged. I hate ever to admit that possibility but you're right. Mind, things look up the following day in Santa Fe

You're in the US? Haven't been keeping up, have I? How far east are you going?

Crash, if only I were in America. The blog started off as family history beginning in 1879 and has, at present, reached 1982 when I spent a year in America - a year teaching in New York, followed by a 38 day circular trip around America. It begins and ends in New York and at present I'm in the South west. Next stops include Santa Fe, the Alamo, Texas, Florida, West Virginia, Maryland Washington DC and New York