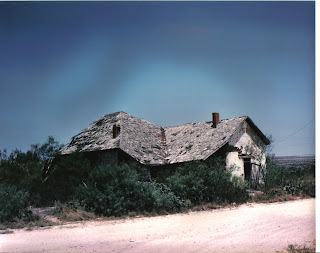 We reached Langtry, Del Rio, home of the famous Judge Roy Bean. There we learnt about unrequited love. An Old West legend had a thing for Lily Langtry - star of English Music Hall.

Some spoil sports suggest that Langtry was named after an obscure railway engineer, but why spoilt a good story? What is true is that the saloon from where he operated his own peculiar form of justice was named in her honour, ‘The Jersey Lily.’

It is a very small saloon, dusty and hot and smelling of past times. Strange, the past has a smell and the future doesn’t. Scope for an entrepreneurial perfumer perhaps.

There seemed little to Langtry. One dirt road led to a ruined house, then desert and sage brush. Little seemed changed since 1880. Time to wander about and find out more.

What can you tell from a face? The photo stared back at me, equally puzzled. What memories lay hidden beneath behind those eyes?

Like all tourists I grasped and retained the bizarre and most interesting: How he used to sell milk and increased his profit margins by diluting it with creek water. A nice scam until customers started complaining about the minnows swimming in it, an even nicer reaction from Roy Bean who pretended equal surprise. ‘By Gobs, I’ll have to stop them cows from drinking in the creek.’

What fired my imagination the most was that his life exemplified everything I’d ever dreamt about as a child in a hospital bed. He was born in Kentucky – so almost a neighbour of Davy Crocket - around about 1825.

When only fifteen he followed his two older brothers west, seeking adventure. He joined a wagon train into New Mexico, crossed the Rio Grande and set up a trading post in Chihuahua, Mexico. There he killed a man and fled just in time to California, where he stayed with a future mayor of San Diego (In fact the first mayor of San Diego) his brother Josh.

Josh believed in family. He appointed Roy a lieutenant in the state militia, and bartender of his Headquarters the family saloon. There, Roy lived the Wild West life. He drank and bragged, gambled on cockfights, and in 1852 was arrested for wounding a man in a duel.

Never mind, Roy had another brother – Sam – and so Roy fled again and took refuge in Sam’s saloon where he smuggled guns from Mexico through the Union Blockade. The only moment of domesticity he seems to have enjoyed (for a time at least) was when he married a Mexican teenager and settled in San Antonio, where, in quick succession he propagated five little Beans.

When the railroad came to Texas he seized his chance, deserting his family and in 1882 settled in Vinegaroon.* The railway was to link San Antonio with El Paso and crossed 530 miles of scorching desert. There, Roy Bean served railroad workers whisky and shade from his tent, and was often as drunk and disorderly as those he served.

Which says something about the Texan Rangers.

In 1882 they appointed him Justice of the Peace for Pecos because in their opinion he ‘had what it would take’ to bring law ‘West of the Pecos’.

With the nearest courtroom a week's ride away, the Rangers might have been more pragmatic than wise, and Roy Bean ‘just crazy, or drunk enough to accept.’

Bean was no Solomon. His justice, like those who’d appointed him was pragmatic, brutal, and sometimes eccentric. When an Irishman was brought to him, accused of murdering a Chinese worker, Bean was surrounded by an angry mob of workers demanding the accused be acquitted. Others threatened to burn down his saloon if he didn't.

Bean scanned through the one law book he possessed and delivered his ruling: 'Gentlemen, I find the law very explicit on murdering our fellow man, but there’s nothing here about killing a Chinaman. Case dismissed.'

Bean enjoyed the reputation of ‘the hanging judge’ though he hanged few if any, and made little use of the penitentiary. He preferred instead to find ‘work’ for them in the locality, and when there was none, staked them out for a time in the sun.

His kindness he kept hidden. Many of the fines he gave to the poor and destitute but never advertised the fact. Even some of the profits from the Jersey Lily bought medicine for the sick and poor in the locality. His rationale was prosaic and real. ‘Well…I haven’t been any gol-dang angel myself and there might be a lot charged up to me on Judgment Day, and I figure what good I can do -the Lord will give me credit when the time comes’. The rationale of a Norman warlord. 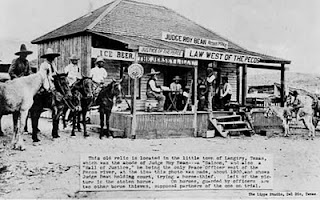 This photo was made, about 1900, and shows Judge Bean holding court, trying a horse-thief. Left of the picture is the stolen horse. On horses, guarded by officers are the two other horse thieves, supposed partners of the one on trial.


Roy Bean died on March 19th 1903 following a heavy drinking spree in Del Rio. He returned home at 10 a.m. and died that night at 10.03. It is said that he’d simply lost the will to live, that he felt out of place in a West he no longer recognized.

What precipitated that final binge was the construction of a power plant on the Pecos River. He claimed more than once that times were changing, and he was being left behind. 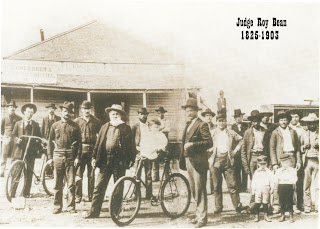 Bicycles are bad enough but a goddamned power plant!

If only he’d held on that little bit longer. Roy Bean and Lily Langtry never met despite his many letters to her. She is supposed to have written back, even sending him two pistols which he treasured like the Old West romantic he was.

Ten months after his death the train stopped at Langtry and Miss Lily herself stepped out. Enroute to San Francisco, she’d decided to take up the old Judge on his invitation to visit him. Unfortunately her most ardent admirer was dead. Instead she visited the saloon named in her honor and listened to the stories. ‘It was a short visit, but an unforgettable one’ she wrote in her diary. Tactful, but no doubt true. 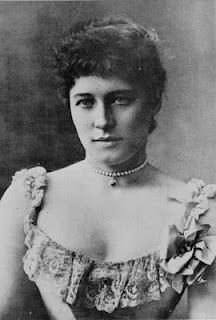 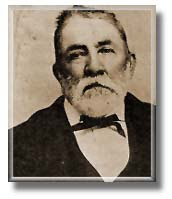 *Apparently named after the scorpions that infested the place. When stepped on they emitted a vinagary smell. Almost a ready-made snack food.
Posted by Mike Keyton at 03:41

And I can't believe Lily had such a tiny waist. I wonder how she breathed in that get up. --not that you ever got that far. ;-)

You're right. I love the period, but I don't think I'd ever invite Mr Bean to dinner.

And I can't believe Lily had such a tiny waist. Maybe that's what Roy was staring at and thinking. Misjudged the man completely

Can't see Roy Bean ever languishing for me.