Checking my toes in Santa Fe 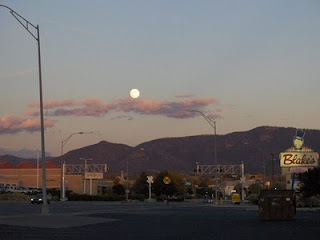 Santa Fe is a beautiful little town. One thing that did strike me were the Indians selling costume jewellery. They were so impassive they might have been a sleep, or dead.

What struck me was how different they were from their Moroccan counterparts. In Morocco the whole business of selling was operatic, the haggling and bartering both subtle and vivacious: a moment of wheedling, followed by mock offence at a more than reasonable offer and then gathering excitement as more and more offers are included in the mix. Eyes, hands, shoulders and flashing teeth - all come into play - and just to sell a rug.

These poor buggers looked asleep, past caring. Temperament? A different history. Or maybe they’d just sussed us out as unlikely to spend much.

Because I have a head that doesn’t suit a hat I spent a lot of time searching for one in every state I passed through. So far to no effect. In Santa Fe I tried again, in a shop with that fine western name ‘Babushka’s.’ Failure was compensated by a lone walk to the Mexican suburbs, and a drink in a really nice bar.

Then it was off to the Coronado State Monument – where I learnt more about the history, and where I took a picture of a rattlesnake. Only afterwards was I told these snakes can leap their own length and I’d gotten far too close. Its rattle warned me to make a tactical retreat. 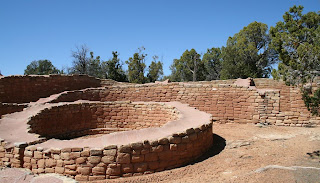 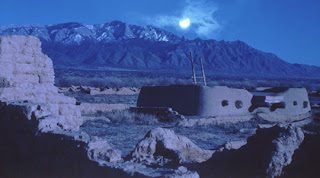 The Pueblo ruins were evocative, the story bleak. After one rebellion Spanish
Conquistadors had chopped off the right foot of every male in the village; a medieval punishment reminiscent of the Twelfth Century, or Sharia law. The mind recoils. Drought and harsh requisitions made by Coronado’s expedition to Kansas saw the final extinction of the village.

Later, back in camp, a travelling theatre group put on a really crude anti-Russian – pro-Polish play about Madame Curie. Poland might have been an unwilling member of the Tsarist Empire, but for the most part they retained both their left and right feet.

That night there was disagreement in the camp. Most wanted to stay on site – money was running low and had to be conserved, but our tour leader believed that her enjoyment of disco was universal. Disagreement was futile because she'd arranged the bus to leave from where the disco was held. So, with considerable disgruntlement we went. I drank, watched wall to wall rock-video, every so often checked my feet.
There followed an all night drive to Carlsbad
Posted by Mike Keyton at 02:58

Brrrr...This has a 'No Country For Old Men' ring about it :)

Ref: They were so impassive they might have been a sleep, or dead.

I wonder if it's just a symptom of the environment. If you cross the border into Mexico, the peddlers gang up on you in a solid wall of flesh.

Are you saying Latinos are more entrepeneural than Native Americans? But then can you generalise in that way at all? (I'm talking about myself, not you, Maria) I mean Sitting Bull never foresaw the Casino cashcow replacing the buffalo.

Ref the solid wall of flesh Scary. Interestingly I didn't come across that on my one day in Acuna