A hat at last in Cherokee 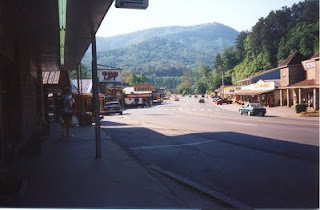 Cherokee is nestled deep within a thickly wooded valley and sadly seemed little more than a tourist centre replete with tack. We walked through a Snake Zoo. . . and wondered why. But Cherokee had one trick up its sleeve. Lurking in the shadows, and waiting for the one who was about to release it was a hat. 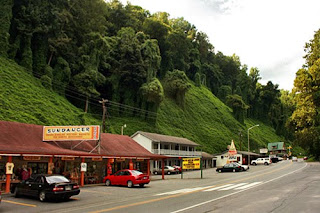 Throughout my entire time in America, I’d tried Baseball Caps, Panamas, Stetsons, even a Fedora, but none fitted my strangely shaped head; somehow or other beneath a hat my face resembled an ambiguous after-thought. 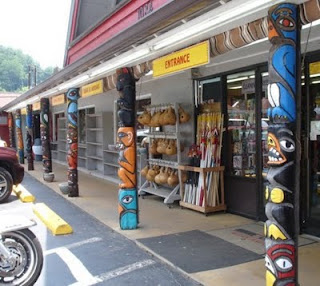 And then, in a Cherokee store, I found it: - a 70’s Black Pimp’s brown suede cap; all baggy and malleable. A sheep, even an orangutan would have looked good in this hat. I tried it on and posed; an extra from Shaft. I fell in love - with the hat.

I took it to the counter, hat and wallet in hand. The owner of the shop, a Cherokee Indian, stared at me and then at the hat. He shook his head. Who did he think he was – my style counsellor? I opened my wallet:

His face remained stoic, impassive, not even a blink. He shook his head again and then pointed at the hat.

‘But it was at the very bottom of a big pile of hats.’

I stared at him with all the resolution of a nineteenth century land-grabber. He stared back with the resolution of one who played poker. We haggled, me oscillating in uncertainty: was I being obsessively greedy in wresting ‘his hat’ from him – or was he taking me for a fool? We haggled some more, his face barely twitching a muscle, until my want and his price eventually approximated.

It’s a fine hat, but my wife refuses to let me wear it.

South African Roland (as opposed to Austrian cocktail champion, Roland) joined me in a seven mile walk back to the camp. Kim, less nature-loving but more astute, hitched a lift. Perhaps in ecstasy at having at last found the perfect hat I seriously over-partied that night, and in consequence was unable to enjoy a view of the Blue Ridge Mountains the following day.
Posted by Mike Keyton at 13:50

Aw, come on. No pictures? How can we assess whether your wife was right without pictures?

Do you really think it was the Indian's hat or was he bluffing? Sounds suspicious to me.

You want the pictures of it on a sheep or an orangutan too? I'll think about it. I can't have the entire blogosphere agreeing with my wife!

And no, to this day I don't know whether the guy was bluffing. I was either an obsessive tourist depriving him of his heritage or he had a whole pile of those hats places strategically at the bottom of various piles.

When was the last time you tried it on? Maybe she's reconsidered since then.

Hi Mike,
I dropped by via Maria Zannini :)[I saw your comment regarding my cat] :)) Your anecdote is hilarious. This could easily be a short story, don't you think? I love these pics. I want to read more of your anecdotes, so I became your latest follower.
Cheers!
Claudia

Claudia,
Thanks for the generous comments. I'm glad you like the stories. My year in America was a formative experience, though it's only part of the blog which begins in 1870...which makes me very old :)

I miss that hat.

The article is very wonderful. You analyse in the round. I will go on to attention your other wonderful posts. Thank you.