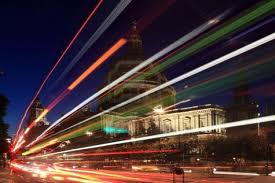 The rush of metal and glass, brick, tarmac concrete and flesh makes London what it is, and buries the past. But glimpses of an older London remain, often in books. They stand obstinate like boulders in a fast river, each creviced in past lives and attitudes, thoughts fossilised in words. 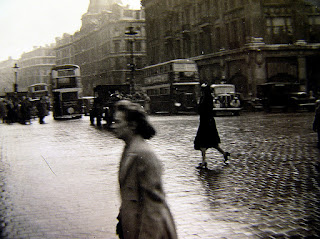 Oxford Circus 1943 Arthur H Nellen
Peter Cheyney’s heroes and villains inhabit a London now gone, as alien in their prejudices and outlook on life as any Arcadian Greek. It would be easy to sneer at them as smug and small minded with very poor teeth, except for the fact that Cheyney’s heroes have exceptionally good teeth considering the amount of alcohol and nicotine they ingest.
John le Carre was recently asked about what spy books that might have influenced him as a child. His answer was interesting. He duly bowed his head to Kipling, Conrad, Buchan and Greene, and then referred to the:
‘…awful, mercifully-forgotten chauvinistic writers like Peter Cheyney and Co. And an anti-German rabble-rouser called E. Phillips Oppenheim who practically launched World War One singlehanded.’
John le Carre’s judgement, though true to a point, is flawed, partly from class, and by his own talent as a writer. Cheyney was chauvinistic, and pretty awful as a writer, but he shouldn’t be forgotten mercifully or otherwise. Cheyney’s success as the most highly paid writer of his time do not necessarily make his books great, but it does show that his work reflected the attitudes and mood of a huge swathe of the population, amplified it an played it back to them. And we’re talking about the popular mood, not that necessarily of the educated but of people who bought his work in droves.
Books are treasure troves of the past, and people reading Conrad J.B Priestly or Greene might recognise a particular version of it, filtered through the author’s imagination. It will though have, or represent, a relatively narrow class base.
Cheyney’s books travelled with soldiers to the battlefields of Europe, and were found in the homes of the ‘Resistance’. His ‘Dark’ series had relevance and brought a new degree of realism to the spy novel with its soiled glamour, its weary brutality.
Peter Cheyney’s world might make one shiver with horror or suppressed glee at his robust and thoughtless chauvinism, his narrow certainties that ‘pansies’ were abominable and foreigners not to be trusted.  He is, though, reflecting an uncomfortable fact that the real heroes of World War II were not the moral icons that the media then and now prefer to portray – the awkward bits cut out.  The heroes of World War II would be homophobic, racist bigots by our standards, but heroes nevertheless. It was the ordinary man with the ordinary prejudices of the time – and the aspirations that Cheyney portrayed. Those less literate than Greene or le Carre made Cheyney rich because he wrote what they wanted to hear, and so provides a reader today a fascinating insight into a world long gone.
Posted by Mike Keyton at 04:50

Cheyney's success seems much like EL James (another Brit, coincidentally) who smashed records with her self-published 50 Shades of Grey series.

Right, wrong, or inappropriate, these authors found their audiences (for the times they lived in).

Oh dear, should I admit I've never read Cheyney? Do I need to head for the library?

LD, I'd be surprised if you'd find anything in print. Most now are yellowing pulps - some collectible. Ref reading them, most definitely, though with one caveat. You need to slip into a 1940s/1950/s mindset and appreciate attitudes that might alternatively shock or amuse you

Interesting. I'm unfamiliar with Cheyney's writings as well. You make some excellent points - one can be a bigot and a chauvinist jerk and still be a good soldier, or a good athlete, and so on... Action, and not thought, often guides their personalities. Wartime heroes rarely make the best role models.

I think anyone in the military, or in any male-dominated workplace - or, for that matter, in American politics - will find that many of these "outdated" prejudices are still rampant. Some is simple Type A personality, macho bullshit. The need to say something "tough" or "edgy" in conversation with fellow males. Others are deeply held convictions passed down through generations. I'd like to think that these views are outdated, a product of the times in which they were produced. But I don't entirely believe it.

I haven't heard of or read Cheney. I used to read spy novels and maybe I should revisit the genre.

First of all, I was much happier to read your post when I saw it was about London. I just love that city and hope to be back one day soon.
Then Cheney; I'm not very familiar with this author, but I read some of the most famous works by John LeCarré and recently saw the movie "Tinker Taylor Soldier Spy" based on one of his novels.
Maybe Cheney was not as talented as the others you mentioned, but as you said, whenever a large mass of people turn to a specific artist, it is still interesting to analyze why they do so. I totally agree with you: it provides a reader with an insight of a world long gone.

And I also agree that one can still be a hero regardless of their inner contradictions and flaws (bigotry, chauvinism...).

Adam - it's an interesting point you make about how Cheyney attitudes may well still linger in echelons of the military, though as you suggest they are no longer the norm in the wider world.

Stephen, If you're able to find any Cheyney it will be in secondhand bookshops. He's now out of print. But I'd offer you the same caveat as I gave to LD. It demands a particular mindset and a tolerance to entering a less sophisticated world.

Jay, London does possess a weird charm - as does Cheyney. I have just finished a book on him which I hope to agent within the next ten days. Hope you all wish me luck : )

So true. Although we no longer look at the world like that, it's still an interesting glimpse into what the previous generations were like. :-)

Thanks, Misha. Just hoping the book finds a publisher : )

While it is true that most of Peter Cheyney's early writing is two-dimensional, saying that he used “thoughtless chauvinism” and that “foreigners are not to be trusted” is simply wrong and I hope your book does not take that angle.

Some of his best heroes were foreign, such as Ernest Guelvada, the free-Belgian. His women were almost always strong and independent; he even wrote a series of stories about Julia Herron in the first person.

Disloyal and weak characters generally met with the sticky end they deserved, regardless of sex or nationality.

As you are aware, the ‘Dark’ books are grittier and reflected the disconnection that many of the returning soldiers felt, breaking new ground for the James Bond series, the first published a year after Cheyney’s death.

To be fair, ‘pansies’ do get something of a rough deal, but homosexuality was illegal at the time - not to justify it, but just to give context.

Adrian,I'm honored that you have responded, and this is not flannel on my part. It was your site that reignited by pre-adolescent love of Cheyney. And I remember earlier advice you gave me on which books to begin collecting. One thing you can be sure of, the book is an honest analysis, and, as an historian I do place Cheyney in the context of his times. I don't entirely agree with you about his portrayal of women. They do tend to cry an awful lot - even the supremely professional Antoinette Brown when she at last realises she is in love. And I do find Julia Heron a bit 'fluffy' and intent on marrying her boss. However, you are right. There are strong women aka Thelma Lyons, Zilla Stevenson, and Tangier, and I give them their due because they stand out.

I think Cheyney was chauvinistic and that in itself is not a criticism. It was the default position of the age - especially during World War II which didn't allow for self doubt.

What I like very much about Cheyney is that his heroes are by and large flawed. And, in his dark novels he gives an unflinching analysis of war and its coarsening effects on sexual morality - which officialdom brushed over, and which was only acknowledged many years later.

The aim of my book is to re-ignite an interest and informed respect of Cheyney - and the reissue of his novels. I pull no punches in the textual analysis. The aim is to entertain and intrigue.

Thanks again for the comment, Adrian. I would love to continue this dialogue via email. I would, for example love to know more about Cheyney's knowledge of France and Latin America where he is quite geographically specific. I'd love to know more about his drinking habits. I sense an autobiographical note in his intimate knowledge of alcohol and its effects on Vallon and Kerr. In this respect Michael Harrison's biography verges on perhaps the over respectful.