A shirt is for life, but pullovers?


I have three pullovers that I hate: one is blue, another is grey, the other a hairy black. All three are acrylic with that vaguely plastic-grease feel to them, all three are grossly baggy after years of successive washes. They hang on me like tents. I could have had years of miraculous pregnancies with no one being any the wiser, I could have housed several illegal immigrants in their folds, I could have effected a partial eclipse of the sun. The worst thing about them was their indestructibility. These things were going to outlive me. A sobering thought.

At last, prodded by my less tolerant wife, I splashed out on three, brand new, very expensive pullovers made from fine English wool. It was O K Corral time for those three acrylic hooligans, bin time. The Tip.

I pulled them out the drawer and laid them on the bed, all three deceptively pristine, all three sartorial must-haves for fashion conscious Sumos. I tried to put them into a black plastic bag but my hands refused. It was like murdering kittens. These pullovers had done nothing wrong. A dog is for life, they say; why exclude pullovers, ones that may have had similar reservations about the body they covered, ones that had never complained but had just been there for me? The jury’s still out. They lurk resentful at the bottom of my drawer, disguised by some equally old shirts, a kind of sartorial death-row, execution still pending.

In case you think I exaggerate my penchant for old clothes – let’s call them ‘vintage’ – I present as evidence, two pictures – both presents from my fondly remembered cousin from Seattle. Both are Christmas presents from 1980 and both are worn on a regular basis – well – perhaps not the coonskin hat.

Note the fresh colour of the shirt - brand new Christmas 1981. The beer is Guinesss. That's gone. 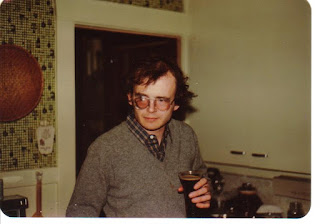 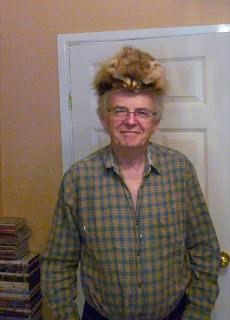 Same shirt worn and washed over the years. Coonskin hat occasionally dusted. Me, washed and dusted. 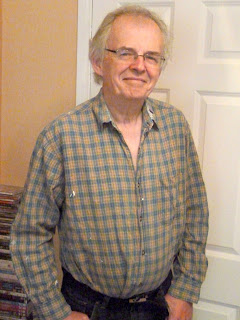 Bowing to pressure, me sans hat; smiling because I reckon that shirt still has a few more years. Thank you, Kathy, Rick, Kirsten and Garrett

That coon skin cap cracks me up every time.

Ref: old shirts
I'm still vain enough to get rid of anything that's ill fitting, but if it's just washed out I keep it.

I like the term 'vintage'. I'm thinking of using it for myself. ;-)

Calling yourself vintage would make you sound like a rare old wine. I see it. Zannini Reserve. Good point about getting rid of the unflattering. That's my downfall - Frugality Vs Vanity. It hurts either way : )

Most entertaining depiction of the pain and dissonance of throwing away ol' faithful clothes that I've ever read. Thank you! :D

I think that coon just winked at me. Brrr.

Vero, that coon is plain flirtatious - and thanks for the compliment. That pain came straight from the heart - but if you're ever thinking you might want one of my vintage pullovers just ask ; )

Don't throw them away!
Think of all the memories the are impregnated with, I bet they look baggy. Fold them carefully and give them their well-deserved rest inside some chest of oak.
That's where I'd like to end my days were I an old pullover.

One should always keep well-loved and useful old clothes under lock and key in our household... my wife is an artist and anything not pristine is fair game for wiping brushes and mopping up spilled paint.

I fail to understand how a slightly worn, slightly out-of-shape, slightly off-white 24-year-old "Cafe du Monde" tee shirt from my only trip to New Orleans - which I defined as "still wearable" should have been re-categorised as "old rags" - though it certainly was by the time I found it again, cowering in a corner of the studio, hidden under a soggy mop.

Phillip, you'll have to go to New Orleans again - and charge your wife. Simples : )

Ask her to paint it as a work of modern art and hang it up as a perpetual reminder. Hmm. Maybe I could make a photo-montage of my three pullovers. They'd like that.