Eurovision...For my daughter who missed it.


My son sits with a bemused smile and a twinkle in his eye, like a courteous Edwardian watching Congolese pygmies performing Wagner. And I sit almost facing him, wondering yet again why we are watching the Eurovision Song Contest.

We have our Pringles. We have wine. We have everything but a reason for watching. It puts me in mind of going to Church as a very young child. The ritual is beyond comprehending but somehow important – we are told and we believe.
Pringles.
We crunch and they vanish, victims of a deep spiritual unease and ennui. The wine is first sipped and then gulped as one meaningless song follows another.

A Spaniard sings about his shoes – one called Love, the other shoe Pain. A Finnish woman sings a formulaic pop song and ends it with an ‘I’m-so-naughty’ lesbian kiss. This has been heavily hyped and as a result Turkey pulled out. Small mercies. 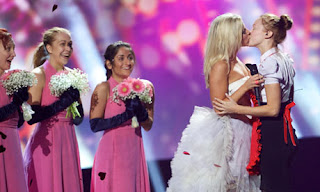 Another woman, the Ukrainian contestant, is carried into position by a 7’ 8” giant wearing two feathers on his head. He is on stage for about 7 seconds so, if Andy Warhol is to be believed, he is owed another 8 seconds of fame. 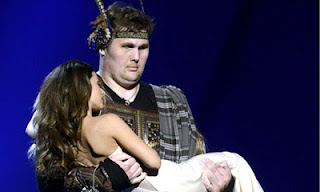 All the songs sound much the same, except for the Maltese contestant. He performs a sunny little ditty – but it is pointless – he looks like Nicolas Sarkosy. Some contestants think ‘standing out’ is a good thing however.

The Moldovan performer grows taller and taller as she sings, her telescopic gown resembling a glowering volcano. 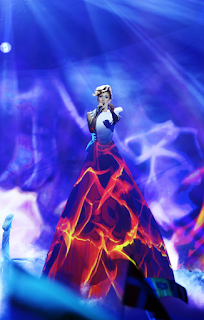 A Rumanian, looking magnificently savage, sings in a woman’s voice. 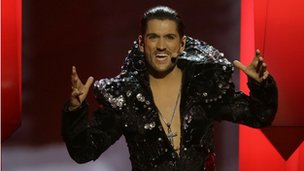 All very bizarre and the choreography  even more so. The dancers resembled mannequins with palsy, though some were inventive. One performer sang on top of a large glass box, his partner miming intense anguish inside it. 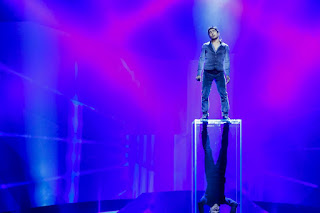 Another thing I noticed – the men had the most amazing eyebrows. In all my life I have never seen eyebrows like them, and the farther east their owners came from, the more prominent they were. That well known European country – Azerbaijan – would have won the contest had eyebrows and not singing been the criteria.  But the thing was, all these luxuriant eyebrows were exquisitely manicured, sculptured by skilled topiarists into large but perfect trapeziums.

Well, you may be saying, this is nothing but sour grapes – Britain coming in 19th out of 26. But this represented a minor triumph, for the previous year we came even lower, and once we scored null points. You might blame the risible voting patterns where neighbourly reciprocity sees Russia and the Balkan states voting for each other, Cyprus for Greece and vice versa –a metaphor for the E.U and why we should get out. Alternatively you might blame a BBC bureaucrat who for two years running chose two pensioners to represent the UK. (Maybe it is time for the Congolese pygmies)  Then again you may say ‘who cares…as long as there are Pringles – plenty of them – and wine, lots of wine.

* For anyone who’d like an analysis of the lyrical absurdities in the songs check out http://wiwibloggs.com/2013/05/14/first-semi-final-your-country-by-country-guide/26338/ It has more wonderful pictures as well as some choice lyrics
Posted by Mike Keyton at 08:01

I think you'd need wine with a show like that. I never knew you were slightly masochistic. :)