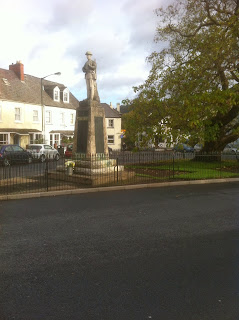 I pass this now worn monument most days. It never fails to arrest me, for a moment or two at least. 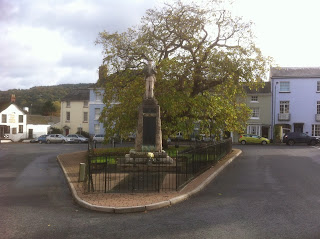 In 1916 an Anglican clergyman, David Railton saw an anonymous grave in a French back garden. On the grave was a crude cross with the inscription ‘An Unknown British Soldier. The clergyman had a flash of inspiration and he acted upon it, writing to the Dean of Westminster. He suggested a national tomb for the ‘Unknown Soldier. The idea resonated in a country racked by grief, especially for those whose bodies were never found, and the result was an eloquent ceremony copied by many other countries in the years that followed.

The ritual, attention to detail, the profound respect, created a potent and melancholic magic.

The ‘Unknown Soldier’ was chosen from four battle areas, the Aisne, the Somme, Arras and Ypres. The four anonymous ‘remains’ were brought to the Chapel at St Pol where two officers were waiting.  The  bodies were placed on stretchers and covered in Union Jacks. One of the officers, General Wyatt closed his eyes (some say he was blindfolded) and chose a body at random. It was then sealed in a plain coffin and the other three bodies were reburied.

The next day the Unknown Soldier began his final journey, stopping at Boulogne where it was placed in a casket of oak from the gardens of Hampton Court. On it was an antique sword from the king’s own collection and an iron shield with the words 'A British Warrior who fell in the Great War 1914–1918 for King and Country'

A French military wagon drawn by six black horses carried the casket to the harbour. It was accompanied by the ringing of church bells, the massed trumpets of the French cavalry, and a mile long procession led by a thousand children.

Marshal Foch saluted the casket as it was lifted on to HMS Verdun, and just before noon the destroyer set sail escorted by six battleships. Its arrival at Dover was accompanied by a 19 – gun Field Marshal’s salute.
From Dover castle it was carried to London, to be exact Platform 8 at Victoria station, where it remained overnight. (A plaque commemorates it still.)

The following morning November 11th 1920 the casket was placed on a gun carriage and drawn by six horses through immense and silent crowds. Another gun salute was fired in Hyde Park and the entire Royal family and leading ministers joined and followed the cortege, leading the ‘unknown soldier’ to his final resting place. At Westminster Abbey it was flanked by a hundred soldiers all of whom had won the Victoria Cross. Among the guests of honour were a hundred widows and mothers who’d lost a husband or son in the conflict. 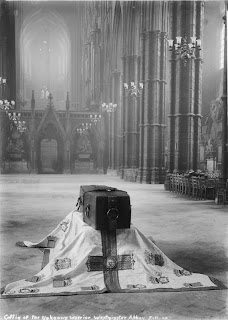 The coffin was finally buried in the western end of the nave and covered in earth from the main French battlefields. The black marble stone came from Belgium. Servicemen stood guard as tens of thousands of mourners filed silently pass. In the first week alone an estimated 1,250,000 people walked past the grave of the ‘Unknown Soldier.’ 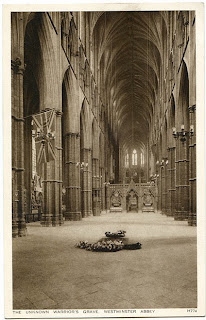 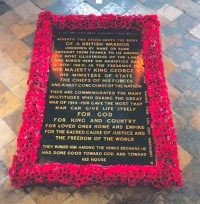 BENEATH THIS STONE RESTS THE BODY
OF A BRITISH WARRIOR
UNKNOWN BY NAME OR RANK
BROUGHT FROM FRANCE TO LIE AMONG
THE MOST ILLUSTRIOUS OF THE LAND
AND BURIED HERE ON ARMISTICE DAY
11 NOV: 1920, IN THE PRESENCE OF
HIS MAJESTY KING GEORGE V
HIS MINISTERS OF STATE
THE CHIEFS OF HIS FORCES
AND A VAST CONCOURSE OF THE NATION
THUS ARE COMMEMORATED THE MANY
MULTITUDES WHO DURING THE GREAT
WAR OF 1914 – 1918 GAVE THE MOST THAT
MAN CAN GIVE LIFE ITSELF
FOR GOD
FOR KING AND COUNTRY
FOR LOVED ONES HOME AND EMPIRE
FOR THE SACRED CAUSE OF JUSTICE AND
THE FREEDOM OF THE WORLD
THEY BURIED HIM AMONG THE KINGS BECAUSE HE
HAD DONE GOOD TOWARD GOD AND TOWARD
HIS HOUSE

For those who believe pictures are worth a hundred words, please click and follow the short and brilliant slide-show

Post script. America did something very similar a year later. I was privileged to visit Arlington in 1982 and wish I knew then  what I know now

With thanks to Ann Barnes, and the Imperial War Museum
Posted by Mike Keyton at 09:31

What a touching post. I'd heard of the American Unknown Soldier, but not the British. Thank you for sharing this little bit of history.

I'm glad you liked it, Dawn. I found it quite emotional writing it...and then the archive pictures.

My grandson did a school trip to Washington, DC last spring. He said the thing that had impressed him the most was the guard at our Tomb of the Unknown Soldier.

Especially in the 20s before the advent of television and social media, it was important to share and remember these soldiers. There's a solemnity that Twitter and FB can't duplicate.

Thank you, Linda. It wasn't until I began writing it that I realised how emotive and powerful subject it was (not my writing - the topic)

Twitter and Facebook are essentially surf. Considered ritual and tradition are the deep currents. God help a culture built only on surf : )