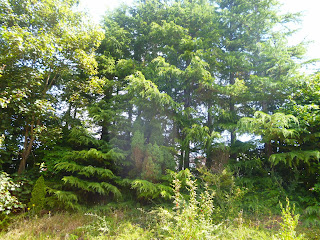 I was well into my latest novel when I heard a faint but persisting rustling. I looked over the screen, through the window, up the drive, embankment and the small patch of wilderness that links our front garden to the road.

No doubt about it. Someone was up there rummaging in our hedge and trees.

I didn’t act immediately. It was warm inside, I was well into the chapter, and besides she/he may just have been waiting for the bus…and was bored.

I kept on writing.
The bus came and went.
The rustling persisted.

I went upstairs, the front bedroom offering a better view of the hedging and road. There was no doubt about it. Mystery person was playing about with our hedge.

Territorial anxiety, anger, competed against the fact I was holding a fresh cup of tea, the fact it was freezing outside, and a general ‘British’ reluctance to cause a fuss.

I tried to return to my work.

I could stand it no longer. I didn’t even put on any shoes. I raced out the house, dark suspicions fomenting in my mind. Some neighbours didn’t like our trees. They blocked their houses from ours. They also blocked a view from theirs. Maybe the mysterious rustler was poisoning our trees. Paranoia comes easy to the Celtic mind.

I burst on to the road and confronted a  lean, elderly lady with piercing blue eyes. She had a large green bag and some shears. I had a large false smile.

“Excuse the curiosity, but what are you doing?”

“I am sorry. I was pinching your pine needles.” She pointed to the pavement where there was usually a large and obstructive mound. “They’re ideal for my compost bins. But in exchange I’m pruning your hedge. It will grow thicker. I’ve taken a Hedging Course in Usk College. I hope you don’t mind.”

Mind, I could have kissed her, except she was sweaty from all her exertions. Trimming our hedges and trees that otherwise block the pavement is a yearly but onerous chore. She could have all the pine needles she wanted. I told her so.

A residue of suspicion remained. Was she in favour of our little bit of wilderness or not? Was this a subtle foray? I introduced the subject of hedgehogs, waxed lyrical about a family of hedgehogs I’d seen in the bushes.  She pointed out an old wasps nest in the hedging and explained the lifecycle of wasps. Suspicion evaporated. My wilderness was safe in her hands; a kindred spirit though still sweaty. 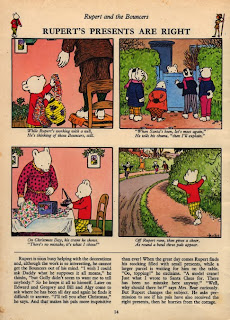 I’m telling you, there are times I really believe we live in the mythical village of Nutwood – something entirely meaningless unless you know Rupert Bear. 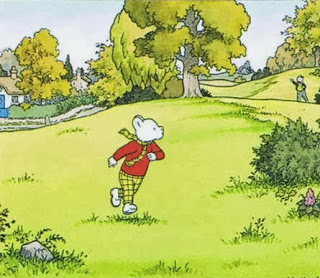 I'd offer her some hot cocoa the next time she's out there trimming your hedges.

Rupert is played on a children's channel here. I watch it when I can. :)

You're right. I should have done so then, but I am a notoriously slow thinker - besides, she hadn't finished.

If it's the same Rupert I've seen on TV I think it lacks the magic of the drawn image in the books. Those are really evocative - along with 'Noggin the Nog'. I think Noggin is on youtube - the drawing and commentary combine to create magic.