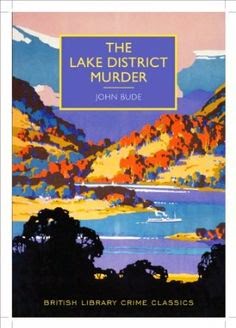 I have just read the worst book I’ve ever read, perhaps the worst book ever written, and discovered a deadly flaw in my make-up. I finished it despite every atom and corpuscle, the bacteria in my gut and eyelids screaming for mercy and an end to the pain. The book – for any masochists out there – is called The Lake District Murder by John Bude, and I can afford to be so viciously wanton because this Pol Pot of the written word is now dead.

It was written in 1935 and has an Introduction by Martin Edwards. Reading the Introduction you’d be forgiven for thinking the book was a winner. It is set in nice scenery, the Lake District, and the story kicks off with the discovery of a dead motor mechanic who has apparently committed suicide. Of course, he hasn’t, otherwise there would be no book, but by God, if only he had and spared us the pain of turning beyond page two.

The hero, Inspector Meredith, is boring, the other characters make cardboard exciting, and the chief villain is someone we hear of but never actually see, so it’s hard to get excited over his eventual demise.
In his introduction Martin Edwards stresses this is an early police procedural detective novel. He makes the point: "Whatever faults may be attributed to the British police force…a lack of thoroughness is not one of them.” I should have taken that as a warning.

The book takes you with Meredith painstakingly following one lead after another all of them false – but all of them snail-paced and packed with technical details like how petrol pumps work, the respective storage facilities of underground sumps and petrol containers and how fast one could go on the Cockermouth road. And such detailed minutae is regurgited and chewed upon again and again as if our hero had three brains instead of the ruminant’s three stomachs. Then, a third of the way through, when we know more about the inner workings of petrol pumps than any sane person should, Meredith discovers his mistake and leads us on another false trail. By the end we no longer care who did it or why or how. We just want the bloody book to end.

I couldn’t even throw the book against the wall or set it alight. It was one of those seductive Kindle Daily Deals – a snip or a death sentence at 99p. So burning or smashing wasn’t an option.

I couldn’t. I ploughed on trapped like a dog tied to a post by its back leg, barking at anyone who came near. And that my friends is my flaw – like the apocryphal monkey, its fist trapped clutching peanuts in a narrow necked jar, I couldn’t let go. I had to realise the dreadful ennui of a truly bad book.

Martin Edwards ends his introduction with:  "Those who like a soundly crafted and unpretentious mystery will surely agree that John Bude deserves to be better known."

No he damn well shouldn’t. He lost me a week in too short a life.

You could've asked for your money back. ;-)

I've only ever thrown away one book for which I still feel tiny pangs of guilt, but I just couldn't allow that offal to fall into anyone else's hands.

Haha. Straight to the point. I've read a couple of bad books, but there was one that was so dire I used it as an example of how NOT to write a novel. It's about three people from different classes in society, all sitting in one room arguing with each other. what the room was, why they were sitting there or how they got there was another thing. If it was playing with the minds of people, I didn't get it. And the worst part was, the author actually wrote it as a play and it's on tour!!! How!!!

I'm a humanitarian, too, Maria. That's why I'm warning everyone about this book - at the same time advertising it for masochists or those who want to see for themselves : )

Dawn, for goodness sake spill! Which book, which play?

Do I have to spill?? Really?? Oh okay then. It was Conscience by Johnny Tait. A self published book. I met him doing a book launch in Waterstones and thought I'd support him by buying a copy lol

Thanks, and I understand your reluctance. There is, I suppose, a difference between criticising a dead author and one living - especially a self publisher - though a bad book is a bad book. And should I decide to self publish 'Clay Cross' I'll be open to criticism too. :)