Sarah Jennings was ambitious, single minded, and egocentric. Her husband, John Churchill, may have won Blenheim and a string of other battles but she called the shots, and worked tirelessly for his advancement. By all accounts he adored her.

It was a ruthless, dog eat dog age. John Churchill, a natural Tory had been a favourite of James II who appointed him governor of the Hudson Bay Company, made him a Baron, and confirmed him as a Gentleman of the Bedchamber.

When William of Orange invaded England, Sarah sniffed which way the wind was blowing and persuaded John Churchill to change sides. James lost his throne but  the Churchills did well, John being elevated to an Earldom, and regaining his position as Gentleman of the King's Bedchamber. (If anyone fancies being a Gentleman or Gentlelady of my Bedchamber, feel free to apply)

When Princess Ann, William's sister-in-law became queen in 1702 the Churchill star blazed all the brighter, with Sarah Churchill the new Queen's closest and most intimate friend. Following her husband's example, she became Mistress of the Robes, Keeper of the Privy Purse, and (my favourite) Ranger of Windsor Great Park) John did well, too. He became a Duke, which made her a Duchess.

After Blenheim nothing was too good for the golden couple and a grateful nation funded (until the money ran out) the building of Blenheim on the ancient manor of Woodstock.

All good things come to an end. Sarah, imperious, egocentric and, worse of all drifting towards the Whigs, lost the Queen's favour, which was transferred to the gloriously named Mrs Masham, and the Churchill's left England until the Queen's death in 1714. 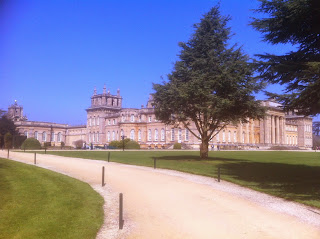 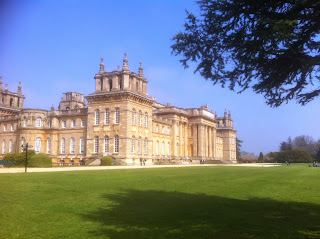 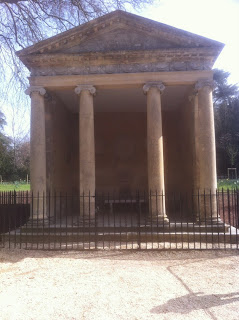 Above and below, the garden temple where in 1908 Winston Churchill proposed to Clementine. The short link is well worth reading 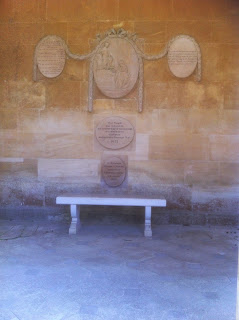 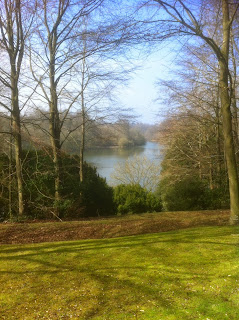 The view Clementine would have observed over Winston's shoulder as she said yes.


John Churchill died in 1722. Sarah Churchill spent the rest of her life glorifying his name until her death in 1744. She quarrelled with architects, craftsmen and ministers. Her first architect Vanbrugh left in a rage, as did the equally gifted Grinlon Gibbons. The building dragged on for decades. Several times the money ran out and the indefatiguable Sarah would embark on fresh quarrels with her builders, cost cutting wherever she could. As late as 1735 the Duchess was haggling over the cost ot Queen Anne's statue in the Great Library. 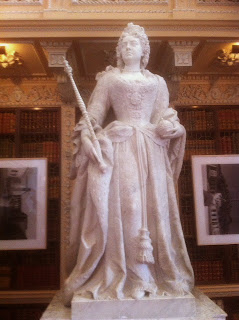 Queen Anne in the Great Library. Note the two Wei Wei photographs to either side of her. They line the bookcases and detract from the original vision. Or, if you wish, replace one 'vision' with another.

Vanbrugh had an ego to match, though it wasn't his money to spend. His landscaping included the building of 'the finest bridge in Europe' over a marshy, trickling brook. The bridge was and is huge, once reputed to have in it thirty rooms and an underground tunnel to the main palace. The former brook is now more substantial because Capability Brown later used dams to create a great lake. 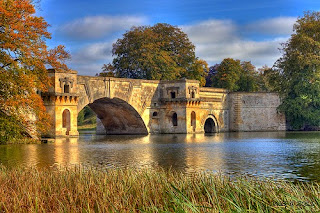 The Victory Column, a 134 feet high terminated an avenue of Elms planted in the position of Marlborough's troops at the battle of Blenheim.

Vanbrugh suggested another, smaller monument - an obelisk to mark the original ancient manor where Henry II played nooky with 'Fair Rosemund' behind the queen's back. The Duchess may just have frowned on adultery. She may equally have frowned on anything that could distract from the Churchill glory. In her words: "If there were obelisks to bee made of all what our Kings have done of that sort, the countrey would bee stuffed with very odd things."

Which leads me to the equally odd, and, dare I say it - egocentric Wei Wei exhibition at Blenheim. Some might say it is a very good thing. I suspect Sarah Churchill would be spitting in rage.

Photos like these line the two sides of the Great Library, each celebrating 'the finger' at authority via various iconic buildings, and each obscuring the books in the library. One presumes he's also raising the finger at Blenheim 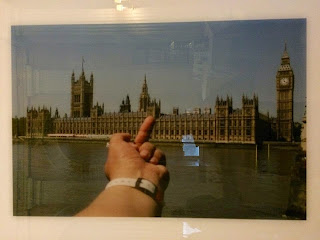 He Xie or 'harmonious' - describing the ideal of Chinese society and also its downside - conformity. And to think Sarah Churchill and Vanbrugh once quarelled violently over competing vision. 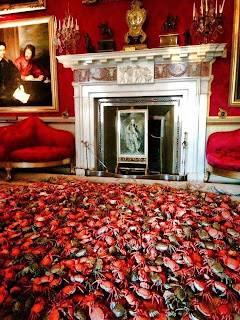 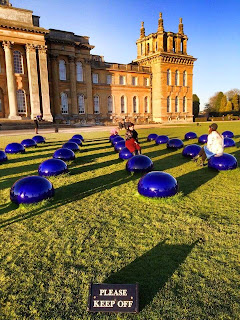 When I first saw the handcuffs on the chair next to the bed where Winston Churchill was born, my first thought was that this was an interesting way of controlling a woman during the travails of birth. Either that or the nurses in attendence were dressed in 'Shades of Grey.' Only later did I find out that this was another Wei Wei artifact celebrating his release from detention in 2011. I haven't figured out whether the handcuffs are the actual 'art' or where they have been positioned  constitutes the 'art.' 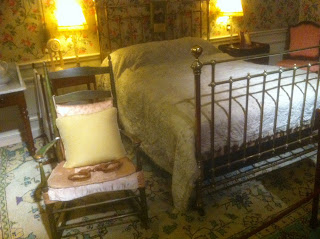 Winston Churchill was born in Blenheim and was inspired by its history, and the first Duke of Marlborough. It might be argued that he saved Britain from a threat far worse than Louis XIV, but the nation was less tangibly grateful. At the dawn of empire, an C18th Monarch could afford Blenheim - kind of. An exhausted empire would afford a State Funeral...and a pair of Wei Wei handcuffs.

The three pictures, showing the Finger, He Xie, and Bubble, by kind permission of Henry Szabransky, who I suspect doesn't entirely agree with my jaundiced view.

Enjoyed. Loved the photos. Kudos for the history.

Thanks, Mac. Blenheim was a great experience.

I don't understand. What is the purpose for including the Wei Wei exhibition? It's totally incongruous with the rest of the setting.

If I want to see English castles and countryside, I don't want to see Chinese intervention. I'd go to China for that.

I hope it's a temporary addition.

I agree. Others wouldn't. It makes for a healthy debate. For me it's verging on 'conceptual art', the kind that plays with landscapes, like wrapping trees in bandages. It is temporary.

Thank you, Maria. That was my question. The Wei Wei just doesn't seem to belong in there at all.

I think the word is cognitive dissonance, Linda. Nice phrase that covers a multitude of sins :)

Interesting bit of history, this. Really finding the art weird, though. :-/

It is a wonderful history, Misha, a period largely unexplored today. The art less wonderful perhaps.