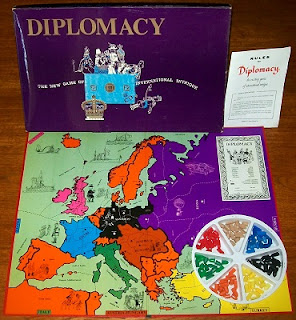 I was teaching the Schleswig-Holstein question to a bunch of New York Sophomores, who liked much about me, especially my accent, but couldn't get their heads around this weird little quarrel between the German Confederation and Denmark in the mid C19th. They brightened up when I quoted Lord Palmerston:
“The Schleswig-Holstein question is so complicated, only three men in Europe have ever understood it. One was Prince Albert, who is dead. The second was a German professor who became mad. I am the third and I have forgotten all about it.” But by the time I'd finished explaining it half of them wished they were dead, or at least mad, and eitherway all of them forgot about it as soon as the lesson ended.

It's a tough call teaching Schleswig Holstein on a hot June day in New York, almost as tough as trying to teach it in Newport and trying to ignore a Head of Biology  urging me vehemently to attack Russia; all this in front of some very bemused students. I know it sounds like a nightmare, or at least a very bad dream, but this was what a game had reduced us to.

The Game is called Diplomacy and demands 4 to seven players and more time than sense. It's a very simple game which involves a large map of pre 1914 Europe - essentially a Europe of empires. The only random factor in the game is who gets which country.

Each player is allowed a Spring and Autumn manoeuvre, which simply involves writing down which adjacent province or sea your piece is going to move to. The aim is to land on a vacant city of a neutral country, and if you retain it over the two seasons you to gain an extra army or navy --- and so on---and so on.  Now this in itself seems remarkably boring, childishly simple but I have seen marrages strained and staffrooms split in opposing camps, each accusing the other of lies and betrayal.

Because before each move you make secret but 'sincere' alliances with one or two of the other players in the game. For example if German moves westwards, France will obvious seek an alliance with Russia. The whole thrust and momentum of the game is either fooling or being fooled in the matter of who promises what; negotiations, firm but secretive handshakes, followed by inevitable betrayal.

The beauty of the game is how closely it matches the European flashpoints of the Edwardian era. Austria, Russia and Turkey both seek the Balkans, Italy will ally with anyone to stop France, Turkey or Austria from dominating the Mediterranean. Britain, Germany and France seek to control Holland and Belgium. But then France is also tempted by neutral Spain, Africa, the Mediterranean.... Can it trust Germany not to attack it from the North?  Britain and Russia seek to dominate Scandinavia. Germany feels surrounded!  Alliances are everything and so too double dealing and treachery. So much to promise. So much to gain.

It is only when the written orders are read out that you find who has betrayed who. Some alliances are unexpectedly built on rock, others on sand, and empires and relationships founder on the basis of promises not kept. 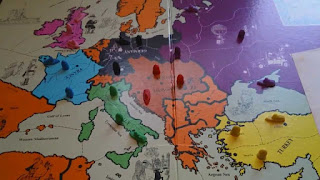 This then was the context of the Head of Biology bursting into my lesson with urgent whispers that a British - German attack on Russia would prove overwhelming. He didn't know that only an hour before, the Head of English had slipped into my Year 2 lesson on the Angevin Empire urging me to attack Germany. I think I said yes to the two of them.

We were all grown men, professionals who had become so addicted to Diplomacy (the board was hidden in the Janitor's cupboard) that it began to take precedence over everything else. My firm conviction is that a bit of lunacy is absolutely essential in teaching, but they don't tell you that in College.

PS The game is also a wonderful adjunct to teaching Modern European History.
Posted by Mike Keyton at 12:36

This game sounds remarkably like the reality show, "Survivor". I've never watched it, but Greg watched it when it first debuted. He explained to me that it was all about alliances...at least until the end when it's every player for himself.

I suppose it's a microcosm of life too. We make alliances with people who make us stronger, smarter, or loved, not for territory, but for the wells of our souls.

Maria, the fascinating thing about Diplomacy is you don't focus on 'yourself' winning. In some alchemical way you identify with your country. You become Germany, You bleed as Mother Russia or Belle France, and the patterns of an early C20th world are eerily evoked.

Mac - 'doesn't hurt' doesn't come into it. Lunacy is essential!