'Patriotism is the last refuge of the scoundrel,' Samuel Johnson wrote. He might have added and 'the flag is his weapon.' 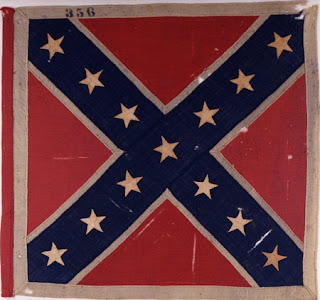 So how do we judge the Confederate Flag in relation to others? 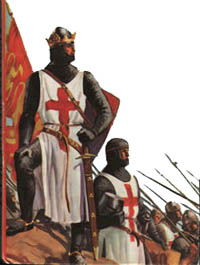 Under the same cross and the Royal pennant, English armies devastated France during the Hundred Years War. English armies fanned across the countryside, raping, pillaging and killing all those who had no monetary value. It was total war, depriving French armies of manpower and food. After Agincourt, Henry V ordered the massacre of French prisoners because he feared they might regroup and launch a counter attack. Many were burnt alive.

Righteous murder continued in different guises and all under a flag. In 1649 the  massacre of Drogheda saw three hundred women and children burned alive in a church, Oliver Cromwell informed Parliament that: "That I am persuaded that this is a righteous judgment of God upon these barbarous wretches." 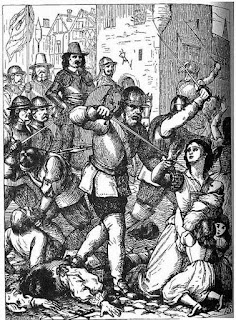 And after Ireland, the world. Shaken by the Boer revolt in South Africa, the British invented the concentration camp where 10% of the Boer population died in one year.
In Amritsar, 1919 British troops opened fire on a dense crowd of peaceful protestors and kept firing until they ran out of ammunition. In ten minutes they killed between 379 to 1000 protestors and injured many others. Though the officer in charge was censured, the British public labelled Reginald Dyer a hero and raised £26,000 for "The man who saved India." 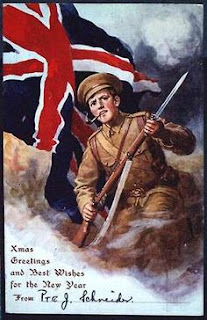 The French and their flag are also associated with oppression and atrocity.Napoleon has many admirers but perhaps not in the Middle East and among Haitians. In 1800 Haiti, producing two thirds of the world's coffee and almost half of its sugar was one of the world's richest colonies. It belonged to France and was dependent on slave labour. Black slaves were lashed, and beaten to work and forced to wear tin muzzle to stop them eating the sugar cane. There were instances of rebellious slaves roasted over slow fires or filled with gunpowder and blown to pieces. And when they eventually rebelled under the brilliant and charismatic Toussaint L'Ouverture, Napoleon savagely crushed them and restored slavery. 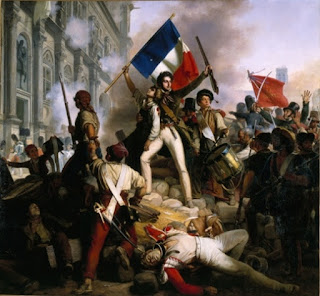 The list goes on. Choose a flag. Where do we start?
Mao's great leap forward caused 45 million deaths in four years 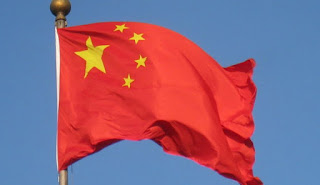 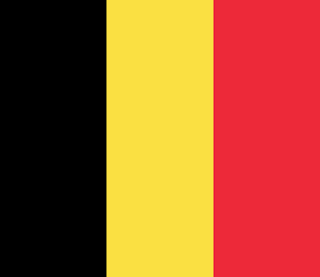 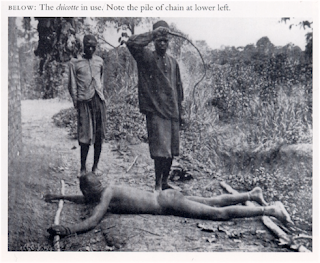 And then we come to the big boys, and surprisingly Hitler comes out quite modest in comparison with Soviet Russia and Mao's China. Admittedly Stalin killed only 7million people between 1932 - 39, but Russian Governments between 1917 to 1987 murdered nearly 62 million in all. 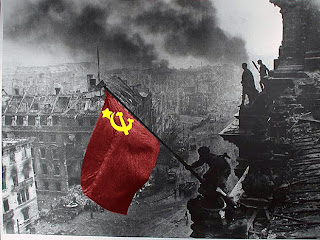 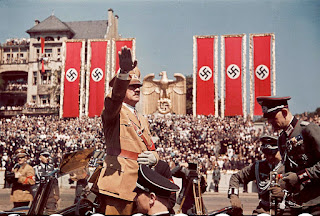 Though not on the same scale as Mao successive American governents did a pretty good job in depriving Native Americans of their land. That was done under the stars and stripes not the flag of the Confederacy, and so, too, were the massacres. Even today, rightly or wrongly, there are many places in the world with much the same feelings towards the American flag as Liberals have for the Confederate flag. 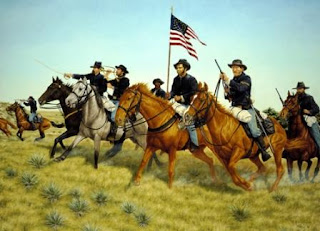 Historians quibble over figures and context so that it's matter of ideology and choice when it comes to disentangling 'heritage' from crimes committed under any particular flag. We forget some things and remember others. Every nation has its massacres - as well as its heroes. Scoundrels exploited flags and the naïve followed their spell, whether the so called 'White Trash' that fought for the Confederacy, or the 'Scum of the Earth that fought with Wellington at Waterloo.

And over time flags lose their potency. The Union Jack that once flew over large parts of this planet is now largely tourist kitsch and this, I feel, was the way the flag of the Confederacy was heading, whether in terms of Southern Rock albums or TV programmes like The Dukes of Hazard. Its more negative connotations being lost in the anodyne wash of commercialism.

Now however, and perhaps unwittingly, the flag has become potent again. In the early 1960's it achieved brief potency because of how racists used it to justify segregation. It was a dark rebellion. It has become potent again but for the opposite reasons. Driven from the mainstream it will achieve a dark glamour it hasn't seen for years and become a focal point for the aggrieved. There are parallels in Britain, where the Flag of St George was very nearly appropriated by by the far right. Might that have been commercially banned too?

Finally, and with every respect, I'd argue that the whole Confederate flag controversy is pretty convenient 'Displacement Activity.' It has proved an easier target in terms of 'doing something' than the powerful and organised gun lobby. It's an easier target than the big drug companies. The number of lone wolf killers who have been on various medications, legal or illegal should be provoking more thought than focusing on a flag.

Re: I'd argue that the whole Confederate flag controversy is pretty convenient 'Displacement Activity.'

Quite true. It baffles me that people are so easily led by the nose, but that's what media and social media does. Instead of focusing on the problem they wage war against a token.

The Confederate flag is a battle flag, nothing more.

Or as Greg once put it: It's the flag of the side that lost.

In regard to all the Confederate battle flag hoopla, it all has to be taken in context. Remember the shootings of unarmed black men by police, the massacre of the parishioners in the AME church in Charleston, new black church fires, the Tea Party rhetoric that poor blacks are shiftless and prefer the government teat to real employment, the fear that the Republican Party will get behind moves to roll back Civil Rights gains. Real or crazy fears? In light of the U.S. Supreme Court rulings on gay marriage and Obamacare, maybe overblown somewhat. Yet a few years ago this same court declared a portion of the 1964 Civil Rights Act unconstitutional. One thing we can say... the repercussions of the American Civil War and Reconstruction are still impacting American society 150 years later. We can say that national flags can indeed become the symbols of unbridled patriotism where super-patriots turn atrocities and massacres into brave victories, as you amply illustrated in this excellent post.

Maria, I like Greg's terse comment, and I agree, attacking a flag is tokenism as opposed to doing something more substantial. Worse it imbues what should have been a useful tourist brand into something more sinister by declaring it so.

Mike, I agree there are some very real dangers in American society, chiefly perhaps the gross inequality of wealth and a very powerful media. I read a throwaway line somewhere, referring to America as a third world country with a first world military - may not be the exact quote, and I'm not saying it's true, but it does, again, hint at the social and political dangers that may lie ahead. AND, against all that we have this furore over a flag. Driving it underground and making it something it needn't be appears to me a hollow victory and distracts from the more serious. I'm arguing a point - but not passionately or in the belief I'm necessarily right. And I'm also aware it's not my ball game so it's not my intention to offend.

Hope my comment didn't make you think I was offended. Not in any way. I am very much a believer in the marketplace of ideas. Your blog post was a good reminder of the 'ethnic cleansing' campaigns done against Native Americans under the Stars & Stripes. Another thought: We're just entering another U.S. Presidential Election Cycle, so the craziness is just beginning. It's going to get wilder in 2016. Already, Donald Trump's immigration/Mexico comments are competing for social media/media attention with the flag flap (and he's climbing in the polls; imagine him as President). As a retired reporter, I do know that fellow journalists have a tendency to not always do follow-ups. Also, it's easier to do a news story that's virtually written for you... the latest campaign flap, who's leading in the polls. Actually analyze a social trend or a candidate's platform on an important issue? No time for that; got to hop on the campaign plane to cover another of Candidate X's canned speeches, maybe he'll do a gaffe. I did do a follow-up of sorts on my flag blog post. This time, though, it's a FB post I did yesterday. I used two paintings by Civil War artists Don Troiani to illustrate my points. Did it show up on your timeline? Check it out. I basically said: "Enough is enough. Respect history including blood-splattered, minie ball-tattered battle flags that have stories to tell.

No, I get the feeling you don't take offence easily, Mike. It was a more general comment because it's not my country I'm writing about. I take your point about the media pecking the dirt like sparrows. Mind you it's those who 'shape' the news who are important. Individual reporters may report, editors choose to highlight or ignore. Over here, 'news' is very much shaped to propagate a message. It's a kind of benign Orwellianism. I did see you post and enjoyed the paintings. I'm a sucker for the evocative!

You offered to host me. Yeah. I love that. Of course I immediately sensed guilt, because I couldn't remember the last time I commented on your blog *Mac groans*.

But if you're willing to help me create a little buzz for my latest novel I'm a taker.

What would you like to do? I had fun doing a character interview with another blogger. But a simple note at the end of a blog would be fine too.

Or if you're more for a guest 'blog', I can do that too. I'm very flexible. You can reply at my gmail address if you'd like...rmachwheeler@

Leslie, sorry for the tardy reply. I'm glad you enjoyed the post, and thank you very much for popping over

No problem, Mac. I'll reply to your gmai address

In our country, we saw the same thing before this whole situation with the Confederate Flag. Except here, it's people pushing to get rid of monuments of people like Paul Kruger and Cecil John Rhodes. Probably more because they're white than anything else. Then there's also the changing of city and street names. Because hey, it's easier to waste all this money on symbols that people will probably forget anyway, instead of actually improving lives by changing the things that NEED changing.

Misha, I've heard about that. I hate history becoming the playthings of cynical pygmies

Hii I'M Fidel Martin.............Here we give you complete data about the Flags of the considerable number of countries with Names, Images, Meanings. Furthermore, Reasons Why does a country have Flags and what is its significance. Flags are used by countries for a couple of reasons past simply having something fly in the air. A country will spend numerous hours and a ton of cash on their Flags design in light of the fact that a Flags is a country's method for portraying itself to the remainder of the world.

For More Info:- List Of All Flags Of The World