Snakes and Ladders: The story of three Beardies. 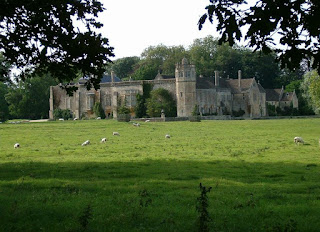 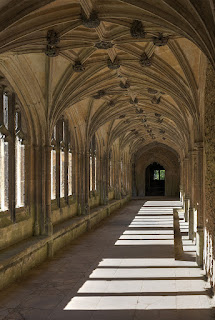 Its history is less interesting or more interesting depending on viewpoint. It was founded in Snail’s Meadow by Lady Ela, the Countess of Salisbury in 1229. The foundation stone was laid in 1232, and she retired there in 1238 some years after her husband died

The nuns and their servants prospered throughout the Middle Ages but the Abbey was dissolved by Henry VIII who sold it to Sir William Sharington for £783.

Like the good Protestant he was. he knocked down the adjoining chapel but retained the cloisters (Luckily for Warner Bros) and built above and around them. 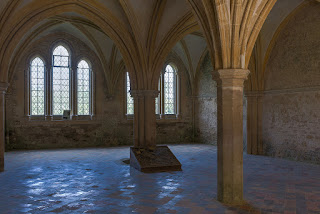 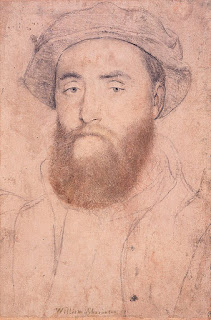 William Sharington exemplifies the ruthless, almost manic lust for property and power that characterized the Tudor period.  Connections and land were paramount. Religion too was important, though it also proved a useful cover.

Through his brother-in-law he became a friend of Thomas Seymour, the less famous brother of Jane Seymour who made the family fortunes by marrying the king. On the back of the Seymours Sharington’s rise was rapid and his acquisition of land began.

Apart from Laycock Abbey he owned fourteen manors in Wiltshire and more manors in Somerset, Dorset and Gloucestershire. He became the MP for Heytesbury and was knighted in 1547.

You might have thought that would be enough for him but like many rich men, he thought himself poor. He dabbled in trade, owning several ships trading from Bristol. He bought and sold sheep, and accrued even more wealth as an active moneylender.

One imagines his joy when he became ‘under-treasurer’ of the Bristol Castle mint – the only mint outside of London. All that silver and gold!

It led to his downfall, or rather his greed did. He debased the king’s coin by making it too light, saving the excess silver and gold for himself: fraud – and at the expense of the King.
Fearing discovery he sought the protection of his old chum Thomas Seymour. 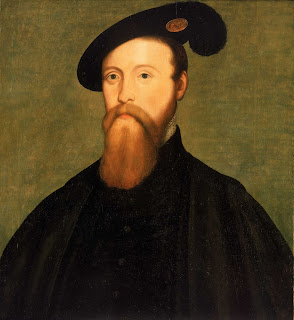 This was understandable but a profound mistake. A contemporary described Seymour as: "hardy, wise and liberal ... fierce in courage, courtly in fashion, in personage stately, in voice magnificent, but somewhat empty of matter.” Seymour proved the truth of it when he embroiled William Sharington in treason.

Eward VI, too young to rule on his own, governed through his regent the Duke of Somerset – Edward Seymour and Thomas’ brother.  Thomas Seymour was riven with jealousy and planned to seize power by capturing the king for himself. Sharington's part  was to finance an armed uprising. The plot was discovered when Seymour was found, gun in hand, outside the king’s bed chamber. He had just shot the royal spaniel for barking too loud.

Thus ended the career of Thomas Seymour, the man who married Henry VIII’s widow, Catherine Parr, but couldn’t keep his hands off the young princess Elizabeth, pinching and tickling her in bed, the man 'somewhat empty of matter.'

Sharington  though immediately squealed, getting off with the lesser charge of debasing the king’s currency. Sharington lost his estates, Seymour his head.

Interestingly Sharington was helped by Bishop Hugh Latimer, who in a sermon to the king called Sharington "an honest gentleman, and one that God loveth... a chosen man of God, and one of his elected." 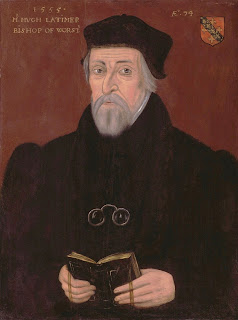 This calls into question the great bishops’s honesty or wit. My suspicion is that Latimer was just another  power-player, a wolf in clerical garb. In this instance the boy King was persuaded. In November 1549 Sharington was pardoned, and in exchange for £12,867, recovered all his estates.


Under the next monarch, Edward's Catholic sister Mary, Bishop Hugh Latimer was burned alive. Sharington, one imagines kept his head down low and survived. One beardie climbed the ladder.

Sometimes my mouth hangs open when I think of all the ways people have lied, cheated, stolen, and murdered their way to the top. And sometimes some of them get their comeuppance, though I can imagine better ways to die than being burned alive.

There is no humanity in humanity.

And it's still going on, Maria, and probably always will. At least then punishments for failure balanced more fairly the rewards of success :)

Hehehe you have an awesome way of sharing history. ;-)

I've always been interested in Tudor history, but I have to say I still don't know nearly enough to call myself a buff.

Thanks for the compliment, Misha. It was my job at one time : interest or die! :)