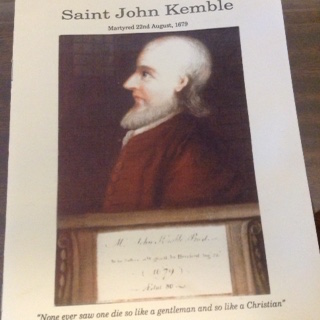 Where would we be without witch-hunts? Today it is ‘Russians.’ Three hundred years ago it was Catholics, and as a result an 80 year-old Monmouthshire priest was sentenced to being ‘hanged, drawn and quartered.’ 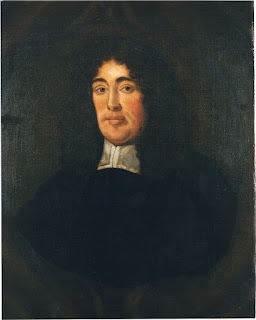 In 1679 Titus Oates accused the Queen of England of being involved in a Popish plot to poison her husband, Charles II. Charles personally questioned Oates and caught him out in a number of transparent lies, but in Parliament, the Whigs (a C17th version of the Democrats) wanted to be convinced and so were. It was the last great persecution of Catholics in England. It lasted three years and 15 people were executed—including John Kemble, the elderly Monmouthshire priest.
Friends warned him to hide until the danger passed but he refused, and in 1679 Captain John Scudamore was sent to arrest him. It is likely that Scudamore, too, was a catholic, though lapsed. His wire and children certainly were.

Kemble was sent to Hereford gaol and later that year was sentenced to be hanged, drawn and quartered.

The sentence was delayed for a time because evidence was needed to implicate others in a newly discovered ‘plot’ to poison Titus Oates. Kemble was ordered to London. Too old and sick to ride, he was strapped backwards on a horse like a sack of potatoes and taken to Newgate Prison. There he was questioned by Titus Oates and Lord Shaftsbury but to no avail. Kemble was then obliged to walk most of the 135 miles back to Hereford gaol. 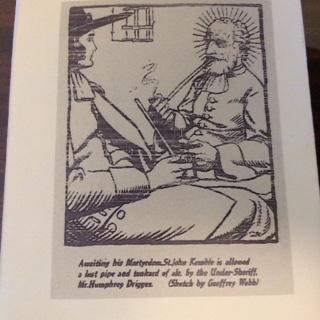 On August 22 1679 John Kemble was executed. Before leaving his cell, he was allowed to say his prayers, smoke his pipe for the very last time, and drink a cup of sherry to steady his nerves.
He was then dragged on a hurdle two miles out of Hereford to Widemarsh Common, where he spoke his final words:

I die only for professing the Old Roman Catholic Religion, which was the religion that first made this kingdom Christian . . . and I beg of all whom I have offended, either by thoughts, words or deeds, to forgive me, for I do heartily forgive all those who have been instrumental or desirous of my death.

The hanging was  botched and Kemble took half an hour to die. So great was the popular sympathy he was spared the butchery of drawing and quartering. Instead his corpse was beheaded and his left hand cut off. It survives to this day as a relic.

His corpse is buried in Welsh Newton churchyard a few miles north of Monmouth.
The famous C18th actress, Sarah Siddons, nee Kemble visited the grave and in a contemporary poem declared herself  more proud to be of the martyr’s name and race ‘than if within our veins there flowed the blood of twenty kings.’