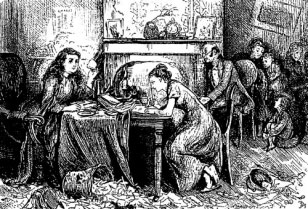 One of Dickens’ great characters is Mrs Jellyby who is so obsessed with poverty in a faraway African country, she ignores the poverty on her own doorstep and the unhappiness of her own neglected family.  I can't resist a small extract, which you can skip if you want to

She was a pretty, very diminutive, plump woman of from forty to fifty, with handsome eyes, though they had a curious habit of seeming to look a long way off. As if they could see nothing nearer than Africa!

The room, which was strewn with papers and nearly filled by a great writing-table covered with similar litter, was, I must say, not only very untidy but very dirty. We were obliged to take notice of that with our sense of sight, even while, with our sense of hearing, we followed the poor child who had tumbled down-stairs: I think into the back kitchen, where somebody seemed to stifle him.

But what principally struck us was a jaded and unhealthy-looking, though by no means plain girl, at the writing-table, who sat biting the feather of her pen, and staring at us. I suppose nobody ever was in such a state of ink. And, from her tumbled hair to her pretty feet, which were disfigured with frayed and broken satin slippers trodden down at heel, she really seemed to have no article of dress upon her, from a pin upwards, that was in its proper condition or its right place.

Peepy (so self-named) was the unfortunate child who had fallen downstairs, who now interrupted the correspondence by presenting himself, with a strip of plaster on his forehead, to exhibit his wounded knees, in which Ada and I did not know which to pity most, the bruises or the dirt. Mrs Jellyby merely added, with the serene composure with which she said everything, “Go along, you naughty Peepy!” and fixed her fine eyes on Africa again.

I was a little curious to know who a mild bald gentleman in spectacles was, who dropped into a vacant chair (there was no top or bottom in particular) after the fish was taken away, and seemed passively to submit himself to Borriohoola-Gha, but not to be actively interested in that settlement. As he never spoke a word, he might have been a native, but for his complexion. It was not until we left the table that the possibility of his being Mr Jellyby ever entered my head. But he was Mr Jellyby;

During the whole evening, Mr Jellyby sat in a corner with his head against the wall as if he were subject to low spirits. It seemed that he had several times opened his mouth  as if he had something on his mind, but had always shut it again without saying anything.

Mrs Jellyby, sitting in quite a nest of wastepaper, drank coffee all the evening and dictated at intervals to her eldest daughter. She also held a discussion with Mr Quale; of which the subject seemed to be, if I understood it, the brotherhood of humanity; and gave utterance to some beautiful sentiments. I was not so attentive an auditor as I might have wished to be, however, for Peepy and the other children came flocking about Ada and me in a corner of the drawing-room to ask for another story; so we sat down among them, and told them in whispers Puss in Boots and I don’t know what else, until Mrs Jellyby, accidentally remembering them, sent them to bed.

It’s a classic example of exalting the abstract and ignoring real people – a sin common to most totalitarian creeds and those with ‘a mission.’  It puts me in mind of those currently obsessed with persecuting the dead— can’t get more abstract than that —and in consequence not just taking their eye off the ball but replacing the ball with slogans, divisiveness and likely a reaction which will be to nobody’s good.

Two cases in point. Activists in North London want to rename a school because it is named after a road, which in turn is named after the great Uncle of Cecil Rhodes, an otherwise blameless man—Thomas Rhodes—two generations apart from the pantomime villain in question. Go figure. Well, the leader of the local council, Joseph Ejiofor, has figured it out for you: schools shouldn’t be named after the relatives of ‘white supremacists’ even those two generations apart.

The second, equally recent case concerns four statues fronting the iconic Shelbourne hotel in Dublin. The 153-year-old statues are of four women holding torches above their heads and are/were a well-loved landmark until a poorly researched internet article decided that they were in fact slaves and the Marriot organisation owning the hotel had them promptly removed. It took a UCL professor to point out that the C19th art catalogue described them as four Egyptian and Nubian women and that the presumed manacles were simply gold ankle bracelets. 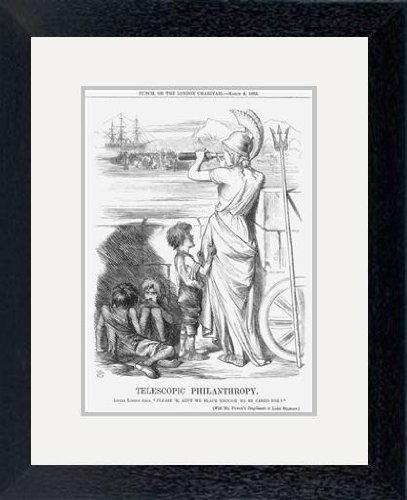 Getting back to the more innocent Mrs Jellyby, the parallels are clear ‘telescopic philanthropy’ is so much easier than dealing with what’s in front of your nose. More sinisterly, it’s also a useful distraction pitting one section of an underclass against the other with its talk of white privilege. Slavery, real or its equivalent, is a contemporary issue as the lowly paid textile workers of Leicester will testify. Knocking down statues doesn’t do them any good. Maybe, in the far future, when it is convenient to do so, the Mrs Jellybys of the time will ignore the problems of their era and focus on ours.

I wish I knew the secret for shaking the stupid out of people. I don't mind them learning the hard way. I just don't want to go on that ride with them.

I've already learned my lessons, thank you very much.

'I don't mind them learning the hard way. I just don't want to go on that ride with them.'

Love it. Much the same is said in 'Wisdom' in the old testament. Forgotten where exactly