As yet, no loins have been griddled. 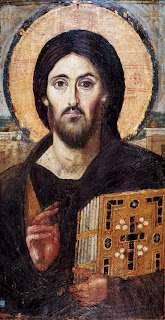 The Mustard grain is the smallest of all seeds, but when it is grown it is larger than the garden plants and becomes a tree, so that the birds of the air come and make nests in its branches. Mathew 13.32

Christ gives two evocative images of Heaven’s intrusion upon Earth, comparing it to the mustard seed that grows into a mighty tree where many birds roost; on another occasion to a pinch of yeast that leavens the bread. You couldn’t get a much tinier seed than twelve disciples living in an obscure province in one of the world’s great empires and bounded to the east by other powerful cultures, never the mind unknown civilisations across the boundless ocean. And yet, within three hundred years it had become the religion of Imperial Rome and continued to spread.

What’s fascinating is the sheer intensity of belief in Late Antiquity, made manifest in the great cathedrals of medieval Christendom, and the courage, bigotry and intolerance of much missionary activity.

The intolerance had early and understandable roots. The story of Christ is relatively simple, his message beautifully clear—or is it? After his death fierce and dedicated minds grappled with the unknowable in their search for a unified faith.

Arians, for example, argued that Christ being created by God was necessarily a junior partner, and this opened a real can of worms. Allow another, albeit minor deity then why not, like pagans they felt so superior to, allow a hundred and one others?

Then in response to the emerging and hard-won orthodoxy that God was three in one— Father, Son and Spirit—even more arguments arose. If God was truly ONE, did that mean ‘the Son’ was not subordinate to the Father as the term implies?

Was Jesus equally God and Man? And how does that work? Was he completely divine without any trace of humanity— his body merely a mortal shell for the Heavenly Spirit that descended upon him at birth or his baptism? Or was He the adopted son of God – flesh and blood like everyone else but no less the Christ for that?

Ah, the subtleties of the human mind. Could his divine and human nature be intermingled like water and wine so as to constitute a single nature, or did the two separate natures of Christ co-exist as separate entities like water and oil?

At the Council of Chalcedon, a compromise formula was arrived at ie Christ was Truly God and Truly Man. Just that. No explanation. A mystery. But another branch of the church disagreed. The Monophysites argued for one indivisible nature. The church was riven, and bloodshed ensued, neither side giving an inch.

When the Byzantine emperor, Anastasius, daringly allowed a single Monophysite phrase to be used in the capital’s churches, there were riots. Statues of the emperor were toppled; whole sections of the city were burned, and the head of a decapitated Monophysite was paraded around on a pole to a catchy theological ditty.

The Monophysites were equally intolerant. In Alexandria, where they were most strong, any suggestion that Christ had two natures aroused blind fury. Their Patriarch Dioscorus, less holy man than a Monophysite gangster, was accompanied by black robed enforcers, thugs beating the hell out of any who dissented. When, in 457 A D, the Emperor got round to sacking Dioscorus, his replacement was hacked to bits by an enraged mob who dragged his mangled corpse through the streets of Alexandria.

This mutual intolerance went on for decades, neither side giving an inch. In the C7th the brother of the Monophysite Patriarch had his loins griddled and his teeth pulled out for refusing to accept that Christ was not wholly divine. It may explain why Monophysite Egypt accepted the Arab invasion with some equanimity. As one Monophysite Bishop piously declared the invasion was God’s response ‘to the wickedness of the emperor Heraclius and his persecutions.’

It puts our own more mundane but no less heartfelt squabbles in perspective. Then they fought over the nature of Christ, both God and Man.  Now we fight over gender, the authenticity of women, the authenticity of men. Human nature doesn’t change, just the things that excite it. But, as yet, no loins have been griddled.

I guess I got out easy. I'm Catholic and got thrown out of catechism class when I asked a question along this vein to the sister teaching.

To me, it was just an honest question because I wanted to fully grasp what she was saying, but you'd think I had committed a heinous sin.

I haven't stopped asking questions since.

You had, my child. Five Hail Marys