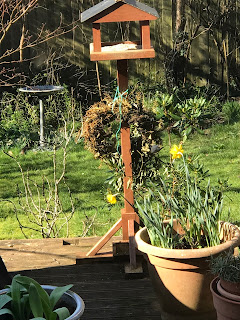 I was down early, rinsing a cup for my morning cup of tea, and happened to glance out of the kitchen window. I expected to see birds – finches, robins, sparrows or one of the two fat pigeons who regularly feed from the bird table. Instead I saw a damn squirrel and realised on the instant that our re-purposed Christmas wreath (our Heath-Robinson squirrel protector) had been circumvented. The squirrel had triumphed. 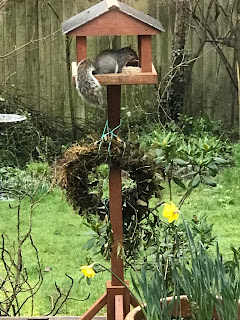 I banged at the window. The squirrel ignored me. I banged louder and it turned, seemed to shrug and return to its troughing. I tried all manner of things, jumping and flapping my arms— not a pretty sight—but it didn’t faze the squirrel. I hit the window with a small saucepan, careful enough not to cause a more serious disaster.

I opened the window—and it turned and just stared. Inspiration struck and I hurled a used teabag but missed and the squirrel returned to its feeding.

It put me in mind of the Choctaw fear of the black squirrel and their belief in its obsession with ‘eating the sun.’ At the first sign of an eclipse whole tribes would ascend mountain tops making as much noise as they could – dogs barking, women and children shrieking at the top of their lungs, warriors bellowing ‘Funi lusa hushi umpa! (roughly translated: the Black squirrel is eating the sun.) It worked of course, their noise frightening the squirrel away and the sun re-emerging unscathed.

At least mine wasn’t eating the bird table and I was also afraid of waking my wife or frightening the neighbours. I imagined the squirrel waving me off as I was driven away my men in white coats. Eventually I gave up. A million years of evolution gone up in smoke, a man in his dressing gown trounced by an insolent squirrel.

*Then I remembered that indispensable adjunct to evolution: Dr Google. Pepper’s the thing, not a withered Christmas wreath. I’m looking forward to seeing that squirrel sneeze. Now I sound like Elmer Fudd.

You sound like me when I see deer munching on my plants.

Squirrels try their best but I've yet to see a single one succeed in getting a single seed unless birds drop them on the ground.

Thanks, Maria, my favourite problem solver 😀