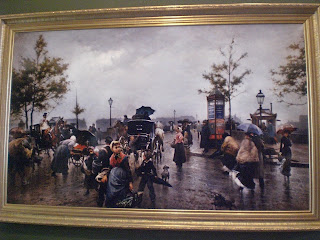 This is a wonderful painting. It captures not only movement but also possibility. The eye is drawn to the woman half turning, and then drifts to every single individual there. Who are they? Where have they been, and where are they going? The painting fizzes with possibility and choice.

In real life choice is limited by many things, most commonly poverty. Still, there remains the thin possibility, for others aspiration or hope.

That wasn’t the case in the zoo at le Parc de la Tête d'Or in Lyon. A bunch of Lemurs on a small island, which they shared with two giraffes and a zebra, looked reasonably happy. There was sufficient room for the two giraffes to stretch their legs, but it was hardly savannah, and the zebra just stood there looking pensive. 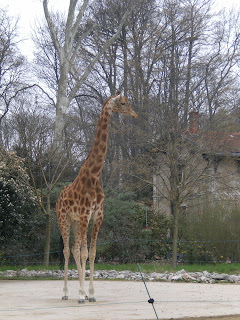 Worse was to come: two small landscaped enclosures, one holding a bear, the other a tiger. Each animal paced a well worn route, the same unvarying pattern that you suspect they had done for years and would continue to do so for more years to come. I watched for some time; slow motion horror. 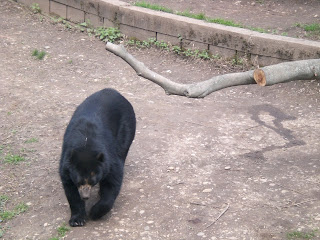 We moved on to two large cages. One held a colony of gibbons; the youngest still intrigued by the possibility of escape. These sat on the highest branches of a dry looking tree, and fingered every loop of the taut black wire blocking the sky…exploring.

The cage next to it held Lulu. She’d been there since 1961. Kennedy, The Beatles and Stones, Hendrix and Dylan had passed her by, the space race, glam rock, punk, the collapse of the soviet empire and the fall of the Berlin wall had all been and gone, and she sat there on the same tree in the same cage. A nursing home from birth. It was time to go.

We passed runners - well actually they passed us – running along circumscribed paths, but that’s a conceit followed my many who question the concept of freedom. These runners had choice, along with the prospect of a hot shower and a drink in a cool Lyonnaise bar.

The following day I experienced another limitation on choice: language. I like to think I speak the language of the world with a happy smile, a shrug, sometimes a handshake. And of course you can point at things.

You have to accept ridicule too.

In Lyon I was puzzled by a word. We’d be waiting on the platform of the Metro and I kept wondering why every train seemed to be going to Prochain until my daughter, who is mostly very patient, told me Prochain wasn’t a destination, but advising us when the next train was due.

It got from bad to worse. The following day we were in Annecy and I sat in the castle courtyard reading my Kindle. An elderly Frenchman sat on a bench opposite me, about ten feet away. He spoke to me, rubbing his forearms and glancing at the sky. I, too, looked at the sky, rubbed my forearms, and threw in a rueful smile. Clearly he was talking about the weather. He spoke some more. I resisted the temptation to spit out ‘Putain’, which my daughter assures me is a safe all-purpose word. Instead I shrugged and nodded, looked some more at the sky.

Five minutes later he stood up, inclined his head and said ‘Good-day’ in perfect English. I hadn’t fooled him. Even my body language lets me down. In this respect my ‘choice’ depends largely on the good will of others.
Posted by Mike Keyton at 07:01

I've always felt sorry for zoo animals. Granted some zoos go above and beyond to create a natural (albeit) small environment for them. And some animals today might be extinct if it weren't for our intervention. But happy? I'm not so sure.

PS An excellent painting. Thanks for sharing it.

I'm sure there's professionalism, kindness and skill involved but I'm sure we can and should be doing better. Personally I'd like ruthlessly protected natural habitat reserves with poachers summarily shot - else put in cages for people to look at.

Well, hell, Mike. I was in a bit of a down place already and you're journey through the zoo pretty much finished me off.

I hate zoos but I like your idea of reserves - especially the treatment of poachers.

Having read your blog I understand why you're recovering from a down place. If I add a dash of cynicism to that dark place I'd suggest a terrorist has more civil liberties interest than an imprisoned animal.