I envy the multilingual – being able to dream in an alien language. I envy my daughter. Fresh from my adventures on the Lyon Metro and my fruitless attempts to shrug in French at Annecy, I went to a museum dedicated to the wonderful brothers Lumiere.  I ended up in a small auditorium crowded with French people watching a film on the Lumiere brothers in French. A few people, I noticed, were sleeping. Putain! Foreigners! I thought, taking my seat. All I had to do was keep awake, nod in the right places, and no one would be the wiser. Despite my dozy appearance I too would be taken for French. It worked. I think. Who knows?

The following day we saw people with even less choice than the animals in le Parc de la Tête d'Or Zoo. They  couldn’t move at all. Worse they were mute. 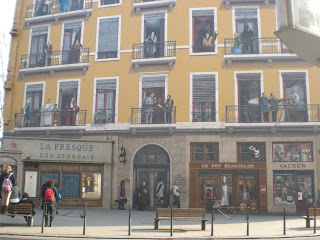 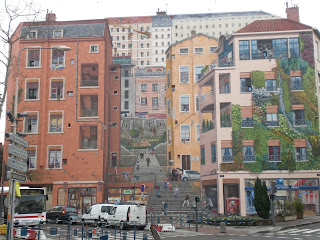 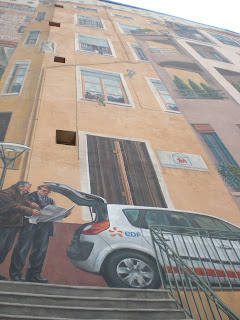 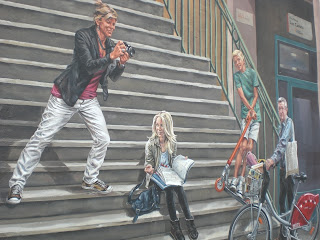 I stood there for ages, wondering what might happen at midnight under a full moon, or perhaps on Walpurgis night. Would they come to life? Would those who observed them take their place in the blink of a Lyonnaise eye?

If you ever see this in a Doctor Who adventure, remember where you read the idea first : )
Posted by Mike Keyton at 01:46

Well, there was the Dr. Who episode where a little girl draws real people and traps them.

I think Rod Serling's Twilight Zone had mannequins come to life--and I think Night Gallery had an episode of changing paintings.

Either way. Creepy. I'll never look at another mural the same way. :)

Maria, you clearly have a creepy pedigree that I lack : ) All those programs. Come to think of it M.R. James had a short story along those lines, too. I shall write a hundred lines...'"There is nothing new under the sun!"

I have to say it is creepy.
At night it must remind of a work by DeChirico, or the atmosphere must be very similar though.
I find mannequins in shop windows just as creepy I have to say, on lonely evenings when the streets are empty.

Hi Jay, now Dr. who did exploit the mannequin idea 👯. But, yes those murals are creepy at twilight - but they don't sparkle!