So the last two posts have been about choice. I was thinking about this today whilst swimming. I was on my 45th length and considering whether I should break the pattern and go for 46.

And then wondered whether in fact I had any choice in the matter.

A woman passed me as I slowed to think about it. She does the crawl and swims like a combine harvester, her arms like scimitars taking no prisoners. Does she have to swim like that? Do I have to swerve and duck?
And if I don’t was a clipped ear predestined before the Big Bang?

This question of predestination is a doozy, the father of Sci Fi itself. If an omniscient God knows my actions before I am born, then my actions are predestined and thus I am without will.

But then what sort of Supreme Being would want to know every thought and action of the billions upon billions who have come and gone on this planet? A totalitarian obsessive comes to mind, which, apart from being blasphemous, doesn’t ring true. Maybe we are all quantum entities; life-changing choices made, measured and judged when we are ‘observed’. Then again, maybe not.

I was safe for the moment, the ‘combine harvester’ had gone, endangering others farther up in the pool. I considered Historical Materialism, the idea that only matter exists, so history is merely the account of matter in motion – matter in motion following predetermined laws.

For the Marxist it is economic forces that drive history. The individual, his life and thought are largely, for some wholly, shaped by these forces. But Marx is not entirely deterministic. He is rejecting ‘free will’ in a vacuum. For Marx, people "make their own history, but they do not make it just as they please; they do not make it under circumstances chosen by themselves, but under circumstances directly encountered, given and transmitted from the past.”

So there I was, 'matter in motion, but, as far as I could seee, economic determinism  had little direct input on how many lengths I should swim. That was good - but heavy stuff for 7.30 am.  I pulled myself out the pool on my 45th length – calculating that another length would bring me in range of the ‘harvester’ and wondering whether she, too, was part of God’s Divine Plan.

I was hungry and my mind drifted to Lyon and the great food market of Les Halles.

I wanted to eat everyone of these cakes, the thousands of cheeses and oak-blackened hams, the oysters, the lobsters,  the wines but my choice was limited by those dammed economic forces that allowed me only so much money, familial horror and disgust if I’d acted on the gluttonous impulse, and the limited size of my gut. 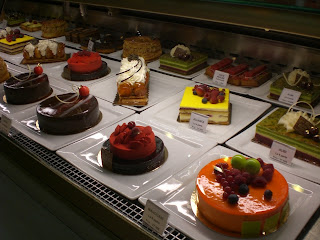 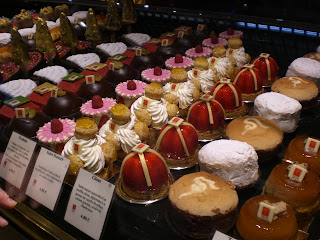 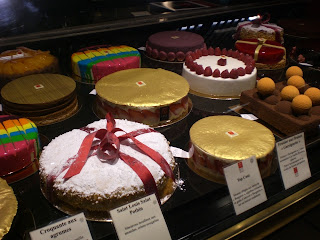 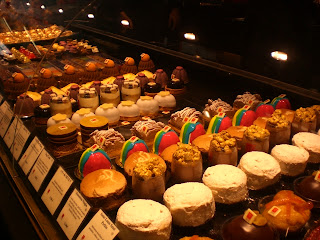 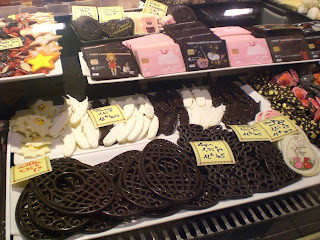 But pity the lobster, its choice replaced by the choice of others. 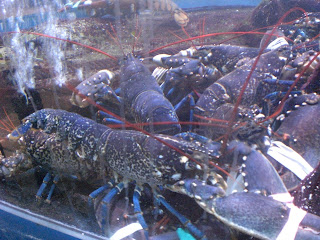 About the only thing on my mind would be: Don't drown.

I think the most absurd thoughts, Maria. They fight boredom. The sheer tedium of it - up and down - up and down. The mind unravels and it takes me a good part of the morning putting it together again. Do you swim? I vaguely remember you saying you didn't but I've forgotten.

When I'm not thinking 'big thoughts' I'm thinking about food. It makes me swim faster.

I've never been able to swim. I rely on the kindness of strangers to keep me afloat in anything deeper than a hot tub. They never seem to mind. :)

I tried swimming with an iPod Nano for distraction (like I used to do when I jogged) but those little suckers do not play well when wet. I certainly wouldn't want my mind wandering into such deep water. Guess I'd better skip the exercise. And for some reason, I'm suddenly hungry.

I could swim twice as many lengths in a hot tub, Maria - so long as the combine harvester wasn't there. As for kind strangers, there are lots of them about. They make the world go round.

Ah, but which cake would you choose - if you could only choose one?

I was always led to believe, studying psychology and the role of the unconscious, that our choices are indeed very limited, and little control do we have over our actions. In my opinion we can really say we're part of God's plan. Now we just have to define God. Does it really matter, though?

When it comes to choosing cakes it matters. It matters very much : )

If God has a certain cake he wants me to eat I have to know!