Friday March 6th got off to a poor start. I found myself seduced by a packet of bread. (I'd be easy pickings in the red light district of Amsterdam) It was a Waitrose Duchy Organic wholemeal 'without reliance on artificial chemicals or fertilisers.' I was looking forward to it all day, deciding on a cheese and tomato sandwich prior to attending 'Any Questions'. 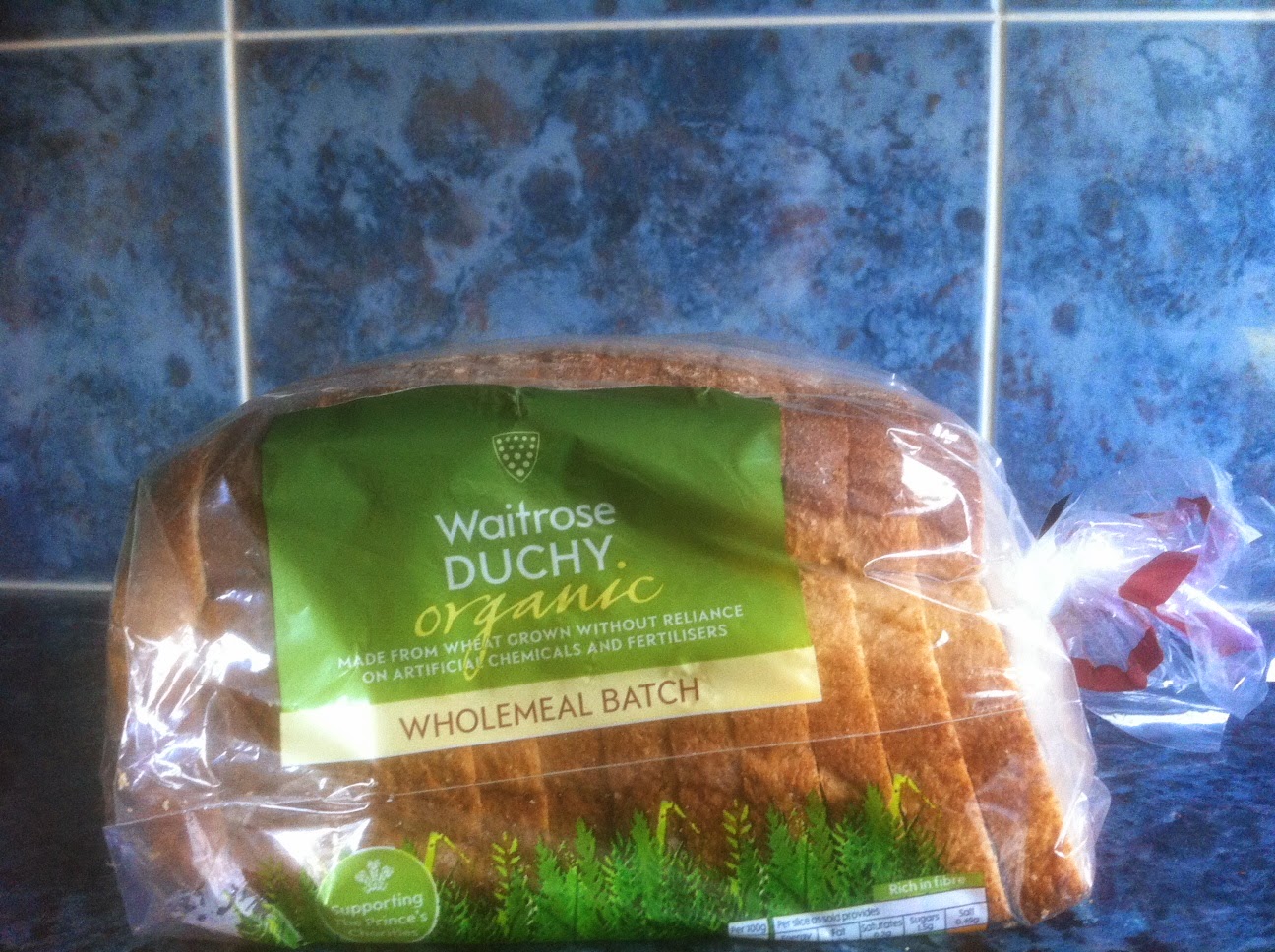 The bread left a dry, acrid after-taste. It was horrible - even with half a bottle of mayonnaise hurriedly applied to disguise it. How was this possible, with its tasteful packaging, its wholewheat grown on the sun-kissed estates of Prince Charles? Try it by all means, but I advise you to stick with his eggs.

In consequence I was quite hungry when I walked the one and half miles to the Blake theatre, where Any Questions was due to be held. We were advised to take our seats by 6.45, and it was packed to the gunnels. I followed a bunch of schoolgirls, all quite excited, some brandishing their tickets. The foyer was full of pupils from both the Girls' and the Boys' school, along with parents and a full crossection of Monmouth's finest, some of whom, judging by their resigned expressions, might have sampled a Waitrose Duchy Organic wholemeal cheese sandwich.

The 'warm up' began at 7.30 and was conducted by a tall sprightly lady with short hair and quite a deep voice. She reminded the audience of the program's history, how it was now 67 years old, and how it all began - an impromptu alternative to a radio quiz. There had been a hitch and moments before going on air the quiz audience were treated instead to four politicians and an invite to ask them any questions they wished. The rest, as they say, is history.

She asked us had we listened to Any Questions the previous week, and reminded us, with some relish, how the UKIP spokesman on the panel had been given a slow handclap by the audience. I thought it a weird thing to say in terms of the famed 'impartiality' of the BBC. We were being invited to laugh at the fat boy who had farted in class.

Just before eight, the panel came on to the stage, along with the chairman, a BBC stalwart, Jonathan Dimbleby, and his producer who sat alongside him. She seemed to be staring at an iPad during most of the programme, occasionally scribbling a note and passing it on to Dimbleby, who would then 'spontaneously' interject with a question to whoever was speaking. 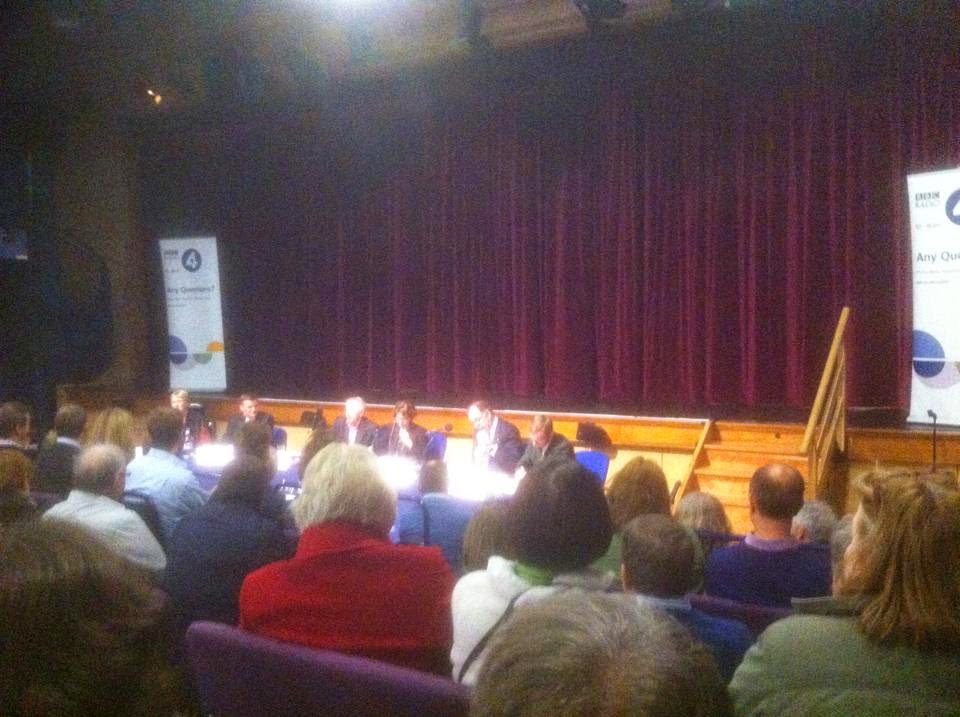 The panel consisted of Baroness Brinton, President of the Liberal Democrats, Chris Bryant, Shadow Culture Minister, Mark Harper Minister for Disabled People, and Efyn Llwyd WestMinister Group Leader for Plaid Cwmru. They were an interesting bunch of people to watch, not necessarily to listen to.

Baroness Brinton cultivated an 'incisive woman of sense persona.' Efyn Llwyd came across as everyone's favourite uncle, with his small moustache and bulging waistline. He twinkled. You could imagine him giving children a polished silver sixpence and dancing at Christmas in shirt and braces. You would go to him for advice if you had a suitably small investment.

Mark Harper, famed for breaking his leg dancing on a Soho restaurant table. 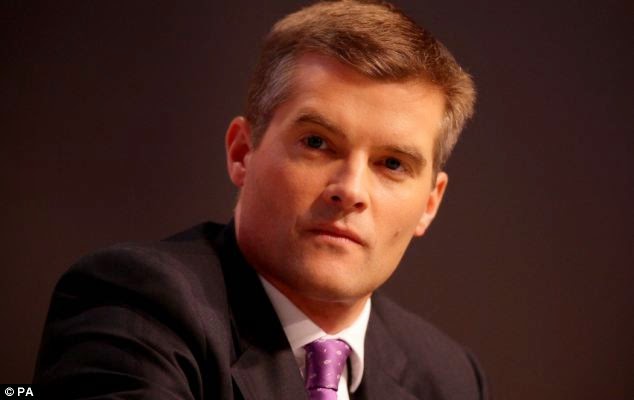 Mark Harper on the other hand looked like Richard III. He was sober suited and did not seem to be enjoying himself - a crucial failing before a live audience - as any teacher will testify. In contrast, Chris Bryant played the crowd with gestures and pantomime winks - something those listening on radio can't see but a live audience responds to. He was glib, and quite patronising to Richard III. On several occasions he told the sombre suited Harper how deeply he loved him despite him being an absolute fool.

Chris Bryant, famed for taking selfies in his underpants. The rich underbelly of Parliament. 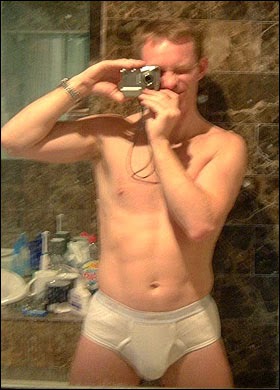 It's been a long time since I've attended a good panel discussion, government, writer, or otherwise.

Too often people bring their egos to the table, or else there's the one jerk everyone tries to step around gently.

Re: rich underbelly of Parliament
At least the US does not have a monopoly on creepy people. I'll bet his mother is so proud. \o/

Your comment about the 'impartiality' of the BBC almost earned a spit-take.

I read this whole piece enthusiastically, like I usually, but the whole time I couldn't get the image of a loaf of Waitrose Duchy Organic Wholemeal Bread parading itself and strutting its stuff in a window in Amsterdam's Red Light District...

Maria, I like mavericks on such panels, even if I don't agree with them. This particular one was so careful and bland. Without the visuals I'd have fallen asleep. The bread was more exciting, in a weird way.

Ref the rich underbelly, google him and you'll find more - but then I imagine you have better things todo with your life

Crash, when you're aware of it, it is quite overpowering. But then we all live within our media bubbles, and if we reject them we invariably end up in other media bubbles that echo our own preferred world view. It's the human condition :)

Damn it to hell, Dawn. Now you've put that image into my head I can't get it out. Fifty Shades of Brown

I can't seem to get past the taking pictures of himself in his underpants. Especially alone and in uninteresting tighty whities. What's the point?

If you google images there's another of him in red pants surrounded by a bevy of beauties. It's what MPs do :)