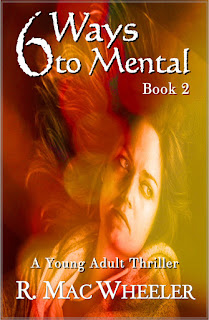 Some people wonder about the meaning of life. With me it's death and whether half of those punks I've consigned to the other side will be waiting for me when it's my turn to choose a coffin and shroud. I glanced across the room at where Sheri was sitting, and grinned. She'd have chosen hers already and nail-paint to match. There'd be others beyond the veil waiting for her too, but she wouldn't be thinking about them. She'd be wondering which saint to seduce first, assuming things went to plan and she didn't end up some place hotter. Old Nick would have one helluva surprise.
"Clay?"
Jeez, she was reading my mind...but no.
"Mac is waiting," she said.
"Mac?"
"-6 Ways to Mental, Mac."
"Jeez, You've brought me a fruit-cake?"
"His book, Clay. 6 Ways to Mental." She planted a kiss on my jaw and knocked me to Heaven. If I wanted more I was gonna have to talk to a guy about a book.
What is your latest book about?
‘6 Ways to Mental’ continues a year after ‘6 Ways to Die.’ Margarite Abernathy copes with PTSD from the brutality she lived fighting terrorists working to unleash a worldwide plague. Outbreaks continue to flare, and her brother quietly battles the terrorists behind them, drawing Mar into the horror again.

You are highly prolific. Is there an optimum number of books published before you begin to make money.
I’ll tell you when I reach that point *smile*

Which two pieces of advice would you give to a new 'Indie' writer?
Two bits wouldn’t help. There is so much to learn, the craft so demanding, the competition and obstacles overwhelming. It is like a neuro surgeon only taking ‘the important’ classes in medical school.

Which fictional character would you like to have a close relationship with?
My seemingly autistic character (you have to read and decide for yourself if he isn’t just weird) Augie in my SEEker series would be cool to hang with.

Which four literary characters would you like to invite to dinner, and why?
I watch the news during dinner, so would rather go out for wings and beer for lunch. My character Carter from my werewolf series would be entertaining, as would Toni from my SF series. I think ogres Morgan and Ike from my Black Lake series would round out the table well.

What are you currently reading?
I’ve just started a dystopian I may not finish by Erica Stevens, ‘The Survivor Chronicles’

Which four books do you wish you had written?
Anything by Anne McCaffrey (the earlier books she wrote herself).

Are you ever afraid that one day you will stop enjoying writing?
I got over that about ten years ago.

Every writer has a weakness, what is yours?
I like to snack too much when I’m editing.

Which author makes you jealous and why?
Any author who is making a living with their writing.

To agent or not to agent? Why or why not?
All the indies who are surviving on their writing first got recognized traditionally, or sold enough to get picked up traditionally (e.g. Wool), so there must be a lesson there.

Has a book ever made you angry. If so, which one?
I read mostly indie titles to support ‘my kind.’ I delete about nine for every one I finish. There are too many self-published books that never should have been published, by authors who don’t know the craft, don’t know the basics of formatting. THAT makes me angry. They are making all of us look like weenies.

Is self publishing the new 'slush-pile’?
I don’t think so. The only titles the traditional publishing components (agents, publishers) look at, hit big sales before they ever look at them, so they let the market (and the author’s marketing skills) drive what they consider. They certainly don’t have to dredge the ‘slush-pile.’

Elmore Leonard listed ten rules, one of which is: 'Try to leave out the part that readers tend to skip. Think of what you skip reading a novel.' What rule or piece of advice would you add to the list, and if you know his ten rules, which one would you happily see broken?
I think all of Elmore’s rules are common sense, if not literal. Rule one, don’t start with the weather. Well, if it is pertinent, the protag is in a sinking boat in the middle of a hurricane, what else would you start out with? The point is…write about what is most important in sequence, to tell the story so that you never drop the reader’s attention or piss her off. All ten rules reflect that goal.

I read the blurb as Sheri saw to R. Mac Wheeler's more intimate needs, putting his coat on, her hand lingering on his shoulder longer than it goddamned should: Nightmares. Panic attacks. Depression. Margarite is hammered by the typical issues of a seventeen year old loner, whose parents sympathized with insane people intending to collapse civilization. Jeez, the dame had problems. The few who care about Mar have more concerns. Her drinking. Fighting. Jumping out of airplanes. Heh,  heh, heh, that's better, though her brother sounds more than a jerk. I gave Sheri a look. The book sounded good but my jaw was still tingling, and Sheri had promised me more.

Loved your intro and outro, Mike.

Thanks for the shout out. Not only a good writer but a gent to boot. (My check is in the mail.)

A pleasure, Mac. Ref Check. Don't make it out to Sheri. She's a booze-hound

Mac, you are so right about writer advice.

On the plus side there's a lot more online information than when I started--but you still have to vet it to see if it's good advice.

Only experience will tell.

Not just experience, but time, Maria ��