We have just come back from the Lake District, but that’s a different story. Three days before we went I stewed some apples, took my eyes from the ball, and ended up burning the pan. The apples tasted quite nice actually, nutty and toffee flavoured. The pan was something else. A thick black crust looked back at me, as to to say, ‘Come on big boy, do your worst.’

It was clearly a case for Dr. Google, and I scanned sites, British and American, on the best way of dealing with a badly burned pan. Each one assured me they had the answer, that this method or another would deal with the problem in no time at all. Certainly nothing so horrid as scraping.

Leave it overnight soaking in Coca Cola—Rubbish.
Leave it overnight soaking in vinegar and baking powder. That looked promising, gave off a nice fizz at least. Verdict? Rubbish.
Soak it in washing powder. Again: Rubbish.
Some suggested boiling with said concoctions beforehand. I tried that, too.
I finally admitted defeat and set to it with a great ball of wire-wool and elbow grease. This is how far I’ve got so far. I think it makes quite a pretty pattern, a fantasy archipelago but not the pan I started out with before burning the apples. 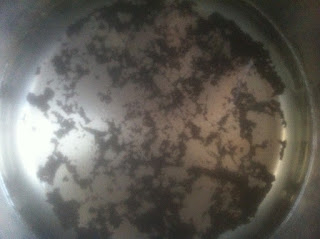 At last I tried the final cure-all. Boil a dishwasher tablet in some water and leave overnight. I did better than that. I left it soaking while we went of to the Lakes. And came back to find this:

A fresh ball of wire wool and elbow grease it is then, with no quarter given and no further truck with quackeries. No stewed apples for a time either.